In order for plants to produce energy which maintains life, certain cells carry out the process of photosynthesis. I mention photosynthesis because at the center of this process is a part of the plant known as the stoma (or stomata for multiple stoma). The stomata are crucial to the growth and health of every plant. Cannabis is no different, and we will dive into what stomata are, how they operate, and why it is important to understand the functions of stomata when optimizing the cultivation of cannabis in your grow.

Stomata are located on the outermost layer (epidermis) of leaves, stems, and other plant parts. Stoma facilitates the process of photosynthesis by allowing light to enter the intercellular matter, regulates the uptake of carbon dioxide, and monitors the expulsion of oxygen from the plant into the environment (1). An open stoma is necessary for the plant to start and complete the process of photosynthesis, but as the stomata remain open, water is lost by way of transpiration. In fact most of the plant’s water is lost as water vapor through the stomata.

“Over 95% of a plant’s water loss occurs through the stoma via water vapor.” (1)

This is why a balance between light, carbon dioxide, and water must be achieved to avoid putting a plant at an increased risk for dehydration. The guard cells surrounding the stoma help to control this issue. The guard cells surrounding the stoma are a pair of cells that open and close the stomata openings based on several environmental or chemical signals. For example, when adequate levels of usable light and above average levels of carbon dioxide are absorbed by the plant, the guard cells take in solutes such as sugars and potassium (3). The increase in solutes within the guard cells causes an influx of water into the guard cells which cause them to increase in volume. As the guard cells expand, the stoma opening is revealed at the center of the pair of guard cells. As the stoma opens, gases can exchange between the plant and the environment. If the supply of solutes such as potassium is inadequate, it is possible that the opening and closing of stomata could slow down to a process that takes hours instead of only minutes which will slow down the growth of your plants (8). 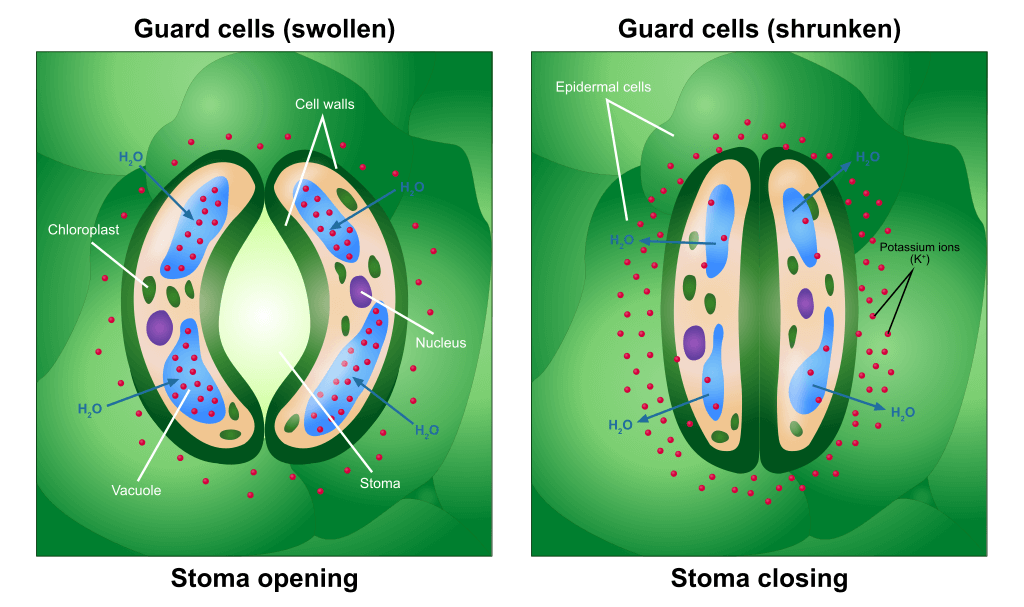 Opening and closing of stoma through guard cells. Image by Ali Zifan (2).

Stomata are typically triggered to open in a direct response to adequate light available so that plants can make use of carbon dioxide in the atmosphere for the light-dependent process of photosynthesis (5). Stomata will usually close in a direct response to the lack of adequate light. Besides light being a major contributing factor, there are other factors that can indirectly affect the opening and closing of stomata. Stomata pores will also close if excess water is lost such as during a drought, overheating, and other environmental factors which causes water to leave the guard cells and closes the stoma opening. Other environmental factors such as low relative humidity and windier conditions can also increase the rate of transpiration causing the plant to lose water excessively (1). This is because the less moist the air is in the environment, the greater the rate of transpiration and vice versa. High temperatures can affect the amount of moisture in the air by increasing the water holding capacity of air. Since warmer air has a higher retention rate for water, its relative humidity will be measured less than the same air sample at a lower temperature. This is why plants in warmer air will transpire more than plants in cooler air and this is how temperature influences water movement out of the plant rather than directly affecting the stomata opening and closing. Wind can affect the transpiration rate of plants by constantly removing the layer of water vapor that clings to the surface of leaves. The increased rate of water moving from the leaf’s surface to the atmosphere causes the transpiration rate to increase in windier conditions. When plants do not have enough moisture from their substrate, they begin to wilt as water in the xylem moves out through the leaves and is not being replaced through the substrate. This in turn causes the leaves and stems of the plant to lose turgor and causes stomata to close.

“In fact, stomatal closure is one of the earliest responses to water deficit, protecting the plants from extensive water loss.” (7).

There have been studies conducted specifically on the cannabis plant researching the functions of stomata. One study on the Cannabis Sativa plant has shown that increased levels of carbon dioxide concentration within the environment causes a decrease in the transpiration rate which increases water efficiency (4). Another study on the Cannabis Sativa plant has demonstrated that one of its earliest responses to a drought is stomatal closure (7). As the laws and regulations for cannabis change favorably around the world, research is continuing to expand and our knowledge of the cannabis plant will only continue to grow.

Stomata on cannabis plants can be triggered to open as a direct response to adequate light so that the plants can make use of carbon dioxide during photosynthesis. They will close as a direct response to the lack of adequate light, but there are also other factors that can contribute to the opening and closing of stomata. Stomata pores will close if excess water is lost such as during a drought, overheating, or other environmental issues which will cause the guard cells surrounding the stoma opening to collapse. Understanding what stomata are and how they function for cannabis production is an important part to optimize a healthy garden full of healthy plants with vigorous growth.