Pythium was formerly classified under the kingdom Fungi, but is now categorized under the kingdom Chromista and the genus of oomycetes (pronounced oh-uh-my-seets). They are commonly referred to as plant parasites, but are also incorrectly referred to as water molds. In fact, fungi are more closely related to animals than to chromista, and chromista are more closely related to plants. One reason for the reclassification of oomycetes is that fungi cell walls are mainly composed of chitin, while oomycete cell walls are mainly composed of cellulose with only minor amounts of chitin (pronounced kai-tin). Other oomycetes include late blights or downy mildews. One example of another oomycete is Phytophthora infestans, which is the oomycete that causes late blight of potato and devastated potato crops during the Irish Potato Famine of 1845. Late blight destroys the leaves and tubers of potato plants which leaves nothing edible behind. This blog post will focus on pythium root rot, a plant disease that affects cannabis and other herbaceous plants. 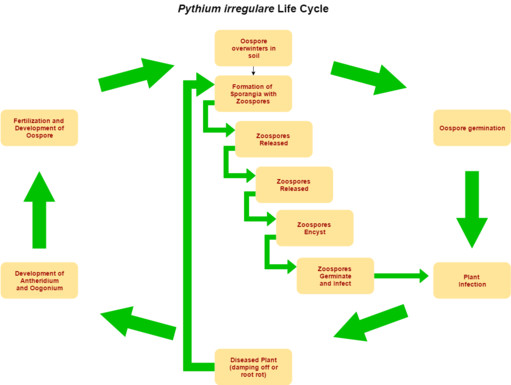 The life cycle of Pythium irregulare notice how symptoms could include damping off or root rot. Image from Wikimedia Commons.

Pythium root rot is also referred to as damping-off or pythium wilt because plants will become water-soaked at the base, then wilt, and finally turn into brown mush. As the base of the stalk weakens, the plant will continue to fall and eventually die. Root rot is a plant disease that infects the root system as well as the lower stem tissues of plants. It is caused by pythium, other oomycetes, and fungi. A wide host range of herbaceous plants, including cannabis, are affected by pythium root rot. Regardless of the pathogen, root rot disease symptoms are similar among herbaceous plants. Cannabis seedlings and clones are especially vulnerable to pythium root rot infections because of the higher relative humidity levels commonly observed at this particular stage in the plant’s life cycle that is also beneficial to the growth of pythium spores.

Vectors for pythium could be dirty grow equipment, poor irrigation practices, poor environmental conditions, and fungus gnats. Dirty grow equipment that comes in contact with a cannabis plant or its medium coupled with overwatering the medium can cause symptoms associated with pythium to appear. Poor environmental conditions such as high humidity levels can also cause pythium spores to grow. Horticulturalists of many different crops report that the feet of fungus gnats can often be a vector for the transmission of pythium. Pythium can be difficult to detect in plants that have been potted in a soil or soilless mix. It can be detected much more easily on cannabis clones. As always, preventative measures are best for resolving issues involving pythium or root rot. Constantly cleaning grow rooms and grow equipment, reducing the amount of water given to plants, allowing the grow medium to dry, and lowering the relative humidity in grow rooms are all possible preventative measures that should be taken throughout an indoor grow facility to dramatically reduce the chances of pythium or other oomycetes from causing root rot in cannabis plants. 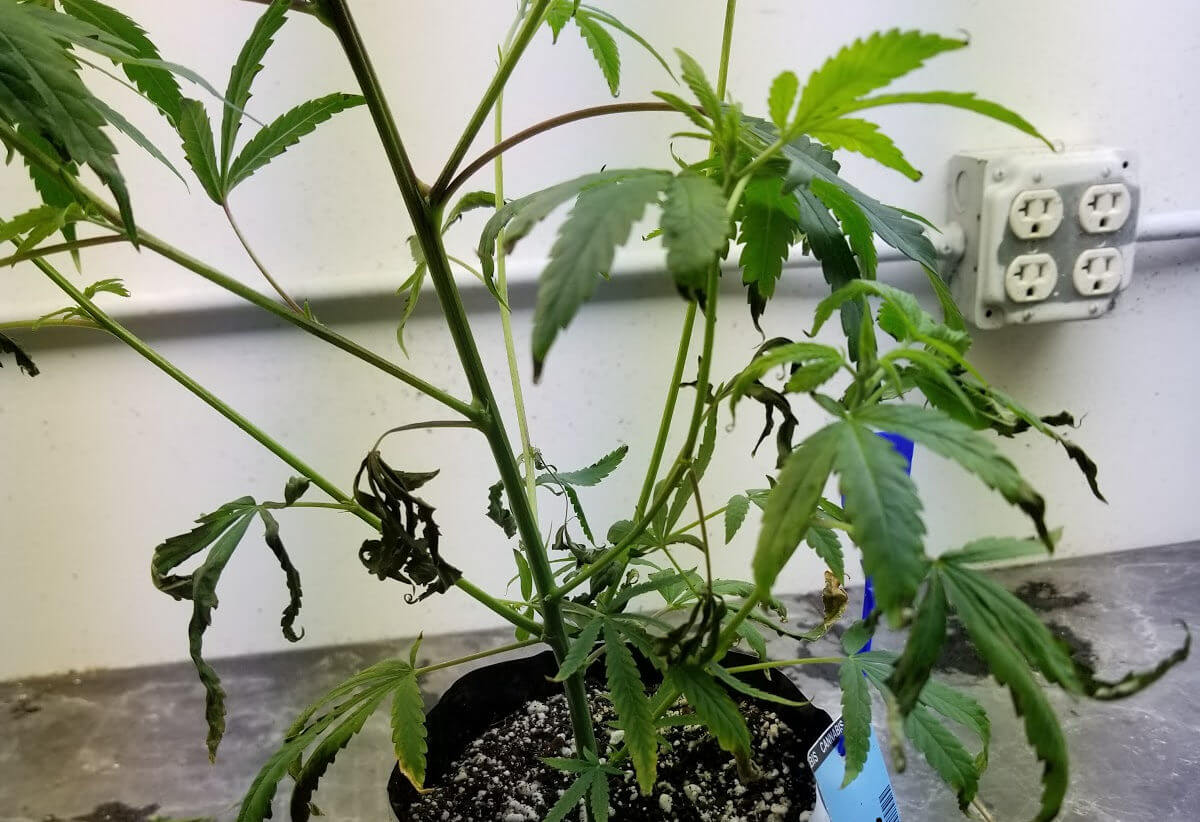 Young cannabis plant in a 1 gallon grow bag grown in coco affected by Pythium. You can tell the plant is somewhat recovering from the effects, but this plant does have a chance of recovery even though the growth will be slow for a period of time.

Pythium is an oomycete that is no longer part of the kingdom Fungi, but is part of the kingdom Chromista. Oomycetes such as pythium can cause root rot, a plant disease in which plant roots turn brown and into mush. Other root rot disease symptoms include wilting and the discoloration of leaves. Plants that have root rot will have stunted growth and could ultimately die. Vectors for pythium include dirty grow equipment, a contaminated grow medium, or fungus gnats. Indoor grow environments with excessive levels of relative humidity causes pythium to spread and grow which increases the chances of plants being exposed and becoming infected with root rot. Excessive watering can deprive plant roots of oxygen and encourage the growth and spreading of pythium as well.