On the first day of January 2014, Colorado became the first state in the United States to legalize recreational cannabis. Fast forward five years later and Colorado is the second largest cannabis market in the country, lagging behind the most populated state of California, but beating out both Washington state and Oregon. Colorado had a revenue of approximately $1.6 billion dollars in 2019 which is only about half of California’s $3.1 billion dollars in revenue for the year of 2019. In comparison, California has an estimated population of 39.51 million people and Colorado has an estimated population of 5.75 million people. Colorado has been able to consistently grow the cannabis market, but other states such as California and Oregon both have struggled to see consistent growth in their state cannabis markets for a variety of reasons including taxation, licensing, and tourism related issues which leads to a strong black market for cannabis. 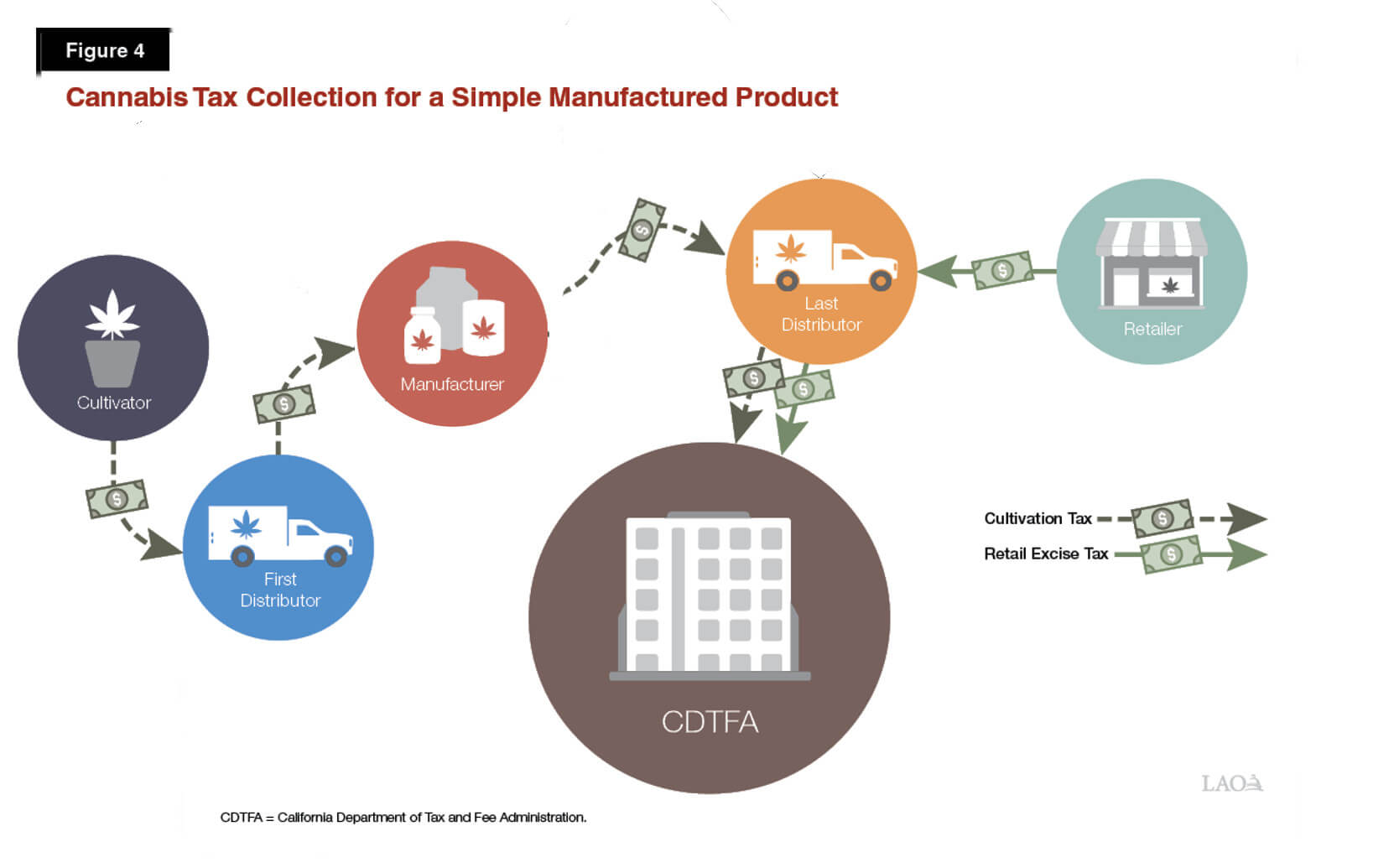 Image of how taxes are collected from the cannabis industry in California. Image is from the California Legislature’s Nonpartisan Fiscal and Policy Advisor (figure 4).

When you are comparing cannabis markets by state, it is important to look how both businesses are taxed by their respective state’s governments. According to a report from California’s Legislative Analyst’s Office titled, “How High? Adjusting California’s Cannabis Taxes”, California has an excise tax (15%) as well as a sales tax on both a state (7%) and local level (varies). In addition to the excise and sales taxes, California cannabis businesses also have to pay taxes for cultivation that is based on the type of product produced such as buds and trim. This can lead to many cannabis businesses passing off the high levels of taxes to consumers which ultimately narrows already thin margins for revenue. Colorado’s taxes are similar with a state cannabis sales tax (15%) and an excise tax on wholesale cannabis (15%). Many businesses in several different cannabis markets are using vertical integration to eliminate some of the taxes they pay when selling cannabis to other retailers. Washington state simplified their cannabis tax system by only levying a sales tax on cannabis (37%) even though it is very high. 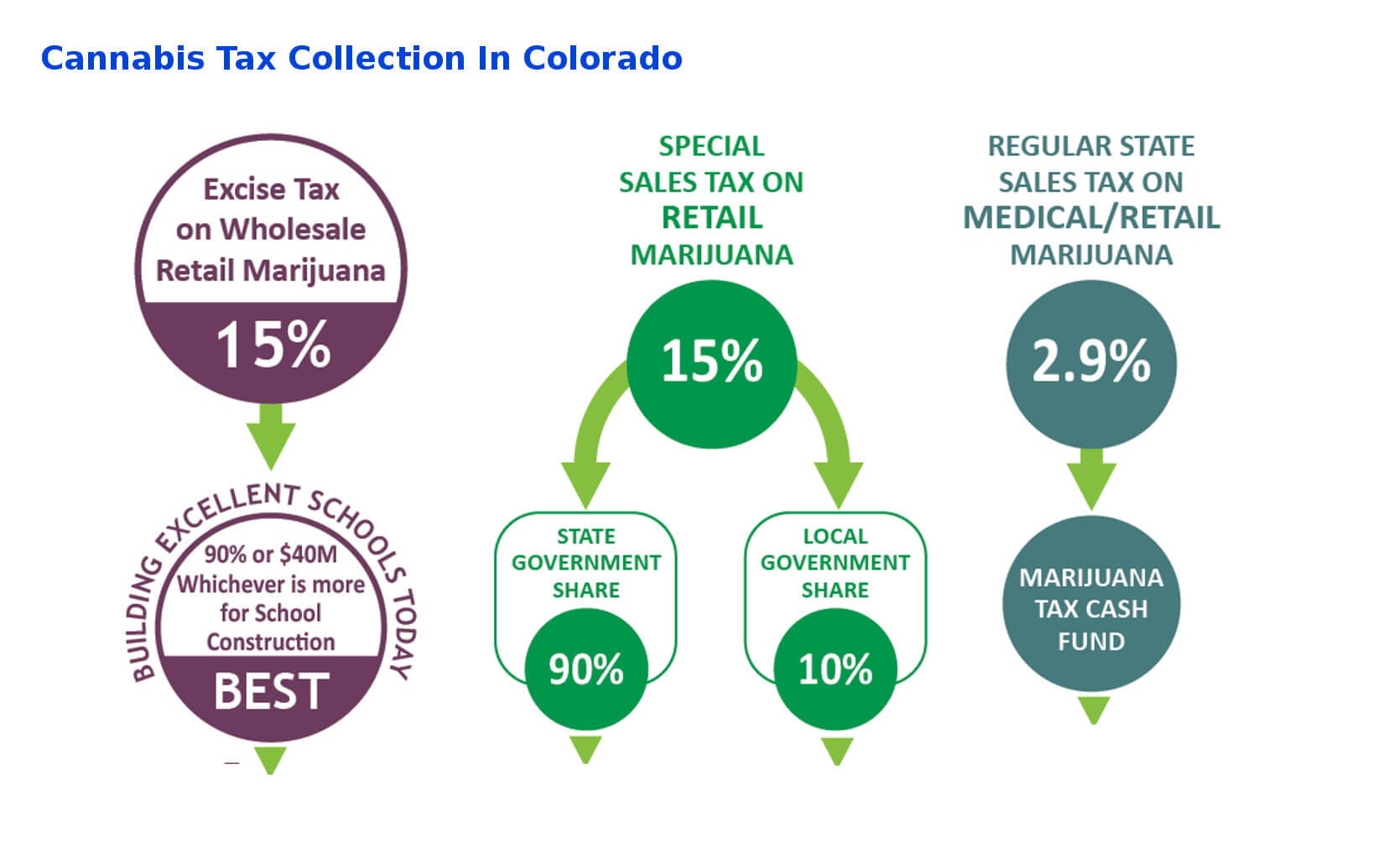 Image of how taxes are collected from the cannabis industry in Colorado. Image is from the Colorado Department of Education website.

The number of competitors allowed to compete in an emerging industry and determining where these businesses can compete has made it difficult for businesses to stay afloat or turn a profit. Colorado has over 3,000 licensed cannabis businesses while California has roughly 10,000 licensed cannabis businesses. A cannabis retail store can sell cannabis in over 10 of 64 counties in Colorado throughout the state with a number of other counties allowing for different cannabis business licenses compared to California’s 9 of 58 counties with only 5 of the counties that have cannabis retail stores. It isn’t as simple as looking at where retail stores are operating, but also looking into local regulations and rules by town or city which can also accept or reject cannabis businesses under both Colorado and California state law. In Colorado, over 70 towns and cities out of 269 total (26% approve) allow for cannabis sales while only 85 towns and cities out of 482 total (17.5% approve). For a more accurate comparison, there is only 0.91 licensed recreational stores per 100,000 residents in California and 9.49 licensed recreational stores per 100,000 residents in Colorado. This means that many of California’s consumers cannot purchase cannabis throughout most of the state. California has also had an issue with provisional licenses expiring for some businesses, but some would continue to operate despite their unlicensed status. The problem had gotten so out of hand that the state of California sent the cannabis advertising company, Weedmaps, a cease-and-desist letter because of all of the unlicensed sellers advertising on their website and the state passed Assembly Bill 97, which imposes heavy fines on cannabis businesses found to be operating without a license. Oregon had a completely separate issue with issuing an unlimited number of retail licenses from the start which caused prices to plummet and creating an oversupply of product which caused a black market to thrive. Despite these issues, Oregon has the most licensed recreational stores per 100,000 residents at 14.02 of any state.

Colorado has the highest sales per person with an average of $280 spent a year compared to $220 in Washington and $130 in Oregon. This may be due to tourism in part which has seen a large increase over the past five years. According to a report from SMARInsights, approximately 25% of tourists in Colorado between the years 2013 - 2018 listed cannabis as one of their reasons for visiting the state. Colorado has wellness retreats, cooking classes, private smoking lounges, and tours that operate throughout the state bringing in tourists every year. Washington state’s pot tourism is growing fast as well, but may not be as developed as Colorado’s pot tourism industry. California entices a lot of out-of-state visitors, but not as many as Colorado does when it comes to cannabis. In fact, Colorado just became the first state to offer licenses for legal venues to allow on-site consumption similar to the cannabis clubs in Amsterdam which may further boost Colorado’s burgeoning tourism industry related to cannabis. It appears that Colorado also accepts the most forms of identification when shopping at a recreational cannabis shop compared to other states. Colorado accepts United States ID cards, state-issued driver’s license, passports (including from U.S. territories such as American Samoa and Puerto Rico), federally recognized tribal cards, and military ID cards. Most other states that have a recreational cannabis market only accept U.S. ID cards, state-issued driver’s licenses, or passports.

In the United States, high taxes seem to be the culprit for limiting legal cannabis sales as black market producers can produce cannabis at a cheaper rate with larger profit margins. Cannabis businesses are already in dire straits with having no federal legal status, and therefore paying a much higher tax rate to operate a business when compared with other industries. Individuals looking to make a quick profit may buy the cannabis in a legal rec shop and then move the product out of state to be sold at a higher cost, especially in states where access is difficult or prices are too high. In fact, Oregon has signed into law the ability for the state to export cannabis for when it becomes federally legal as well as limiting the number of new licenses that are approved. California’s cities that have normally been restrictive of allowing cannabis shops in their jurisdiction are starting to become more pot friendly as they begin to notice the additional tax revenue that is being hauled in by other cities. Unlike other states, California already has a sprawling cannabis delivery service that will only help provide more access to a wide array of products and businesses for consumers. Colorado has started as of January 2020 to implement a cannabis delivery service on the medical side, but plans on implementing it on the rec side starting in 2021.