The Issue with Lumens & Lux

There are several different aspects to lighting that will determine which type of light is best suited and at what intensity. Lumens is a unit of measurement that has long been used by growers to measure the intensity of light. The issue with lumens is it rates the total light emitted without taking into account the different spectrums of light. A high lumen rating does not mean the lamp will provide more light for your plants and their growth. Instead, lumens is a better measurement of the amount of light available for use by people such as lighting for workspaces or schools. The same issue arises for lux measurements. Lux is lumens per square meter and lux meters are meant to measure the amount of light usable by people in a given space. Foot candles are similar to lux because foot candles is the measurement of lumens per square foot. Various wavelengths of light are underrepresented when measuring light intensity using lumens. This is why horticulturalists shun lumen measurements and opt for other metrics such as PPFD. It is important to remember that a bright light for humans is not necessarily a bright light for plants and this will make more sense as we look at other aspects that go into measuring light intensity.

PAR stands for Photosynthetically Available Radiation. It is the light spectrum region of 400nm-700nm which are certain wavelengths of light, primarily the wavelengths that contain red and blue light. The visible light spectrum chart below shows the various colors that are represented at different wavelengths represented in nanometers. PAR is not a unit of measurement, but it defines the type of light that is needed by plants for photosynthesis.

An inexpensive spectrometer can be used as a PAR meter to measure relative light output over a spectral range, but it cannot measure the energy emitted in watts within that specific range of wavelengths. This is why a more accurate tool, a spectroradiometer is used by light manufacturers and experts. This tool can directly measure and compare each lamp’s ability to produce light that is used for photosynthesis. Unfortunately spectroradiometers are expensive which is why it is important to buy lamps from reputable manufacturers who can provide spectroradiometric data that shows the energy per wavelength emitted. This data will let you more accurately compare different lights such as HIDs and LEDs.

PPF stands for Photosynthetic Photon Flux and it measures the total amount of PAR that is produced by a lighting system every second in a unit known as micromoles (μmol/s). This is an important metric for calculating the efficiency or intensity of a horticulture lighting system. It represents how many photons in the 400nm-700nm range are being emitted from the light. PPFD is slightly different from PPF, it stands for the Photosynthetic Photon Flux Density. It measures the amount of photons that hit a square meter every second. PPFD is measured in micromoles per square meter per second (μmol/m2/s). As PPFD increases, the light that reaches the plant is more dense which provides more light for a plant overall to use for photosynthesis. This is why PPFD is prefered over other measurements of light intensity such as lux. High-quality light manufacturers list these measurements for their products with a range of measurements taken at various heights and distances from the light. 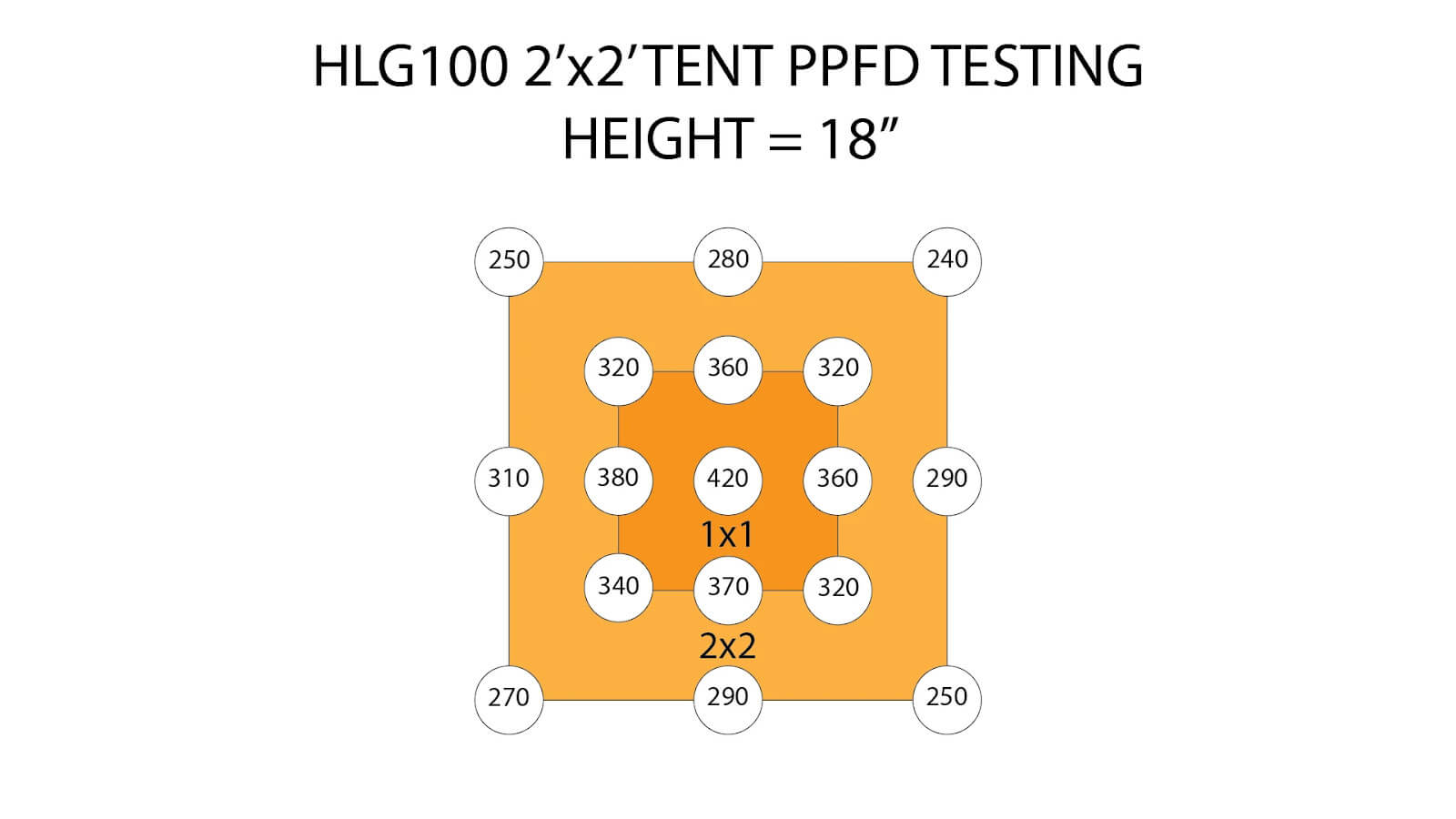 HLG V2 100 PPFD Testing Chart from the Horticulture Lighting Group website. This image shows the measured PPFD results from the HLG V2 100 light with measurements taken at various spots under the light.

A photon is the smallest particle of electromagnetic radiation and is important in determining light intensity for photosynthesis accurately. Photosynthetic Photon Efficacy or PPE, also known as lighting efficacy, is a calculation of how efficient a horticulture lighting system is at converting electrical energy into photons within the specified wavelengths. Light manufacturers may use watts as a measurement for light intensity, but it is only a measurement of electrical input and not light output. You can calculate how efficient your light is by taking the PPF measurement in micromoles and divide it by the watts measurement after converting to joules. A higher number means a higher efficiency of converting electrical energy into light and will provide data on the efficacy of the light being tested.

Converting lux to PPFD is not entirely possible, some assumptions have to be made and it is important to only try these sorts of conversions on proven horticulture lights. Several different lights can be compared even from different manufacturers and since spectrometers and spectroradiometers can be expensive tools, lux meters can be used and they are relatively inexpensive tools to purchase. You can find conversion tools and tables for lux to PPFD online from a variety of sources. If you are looking for a more accurate test of your lighting, then you should consider another alternative before using lumens to measure your light’s intensity for photosynthetic growth. Most of the light manufacturer’s websites will have data regarding their lights which can help you compare different lamps.