The Anatomy of The Cannabis Plant

Understanding the anatomy of the cannabis plant can enable cannabis growers to potentially cultivate a higher quality yield for harvest. Many parts of the plant will be identified and covered throughout various stages of its life cycle in this blog post. Cannabis is known as a dioecious plant, which means it has two seperate sexes and reproduces through pollination. The cannabis flower is the bud which has to be pollinated to produce seeds. Since cannabis plants naturally begin their life cycle as a seed we will start the topic from there. 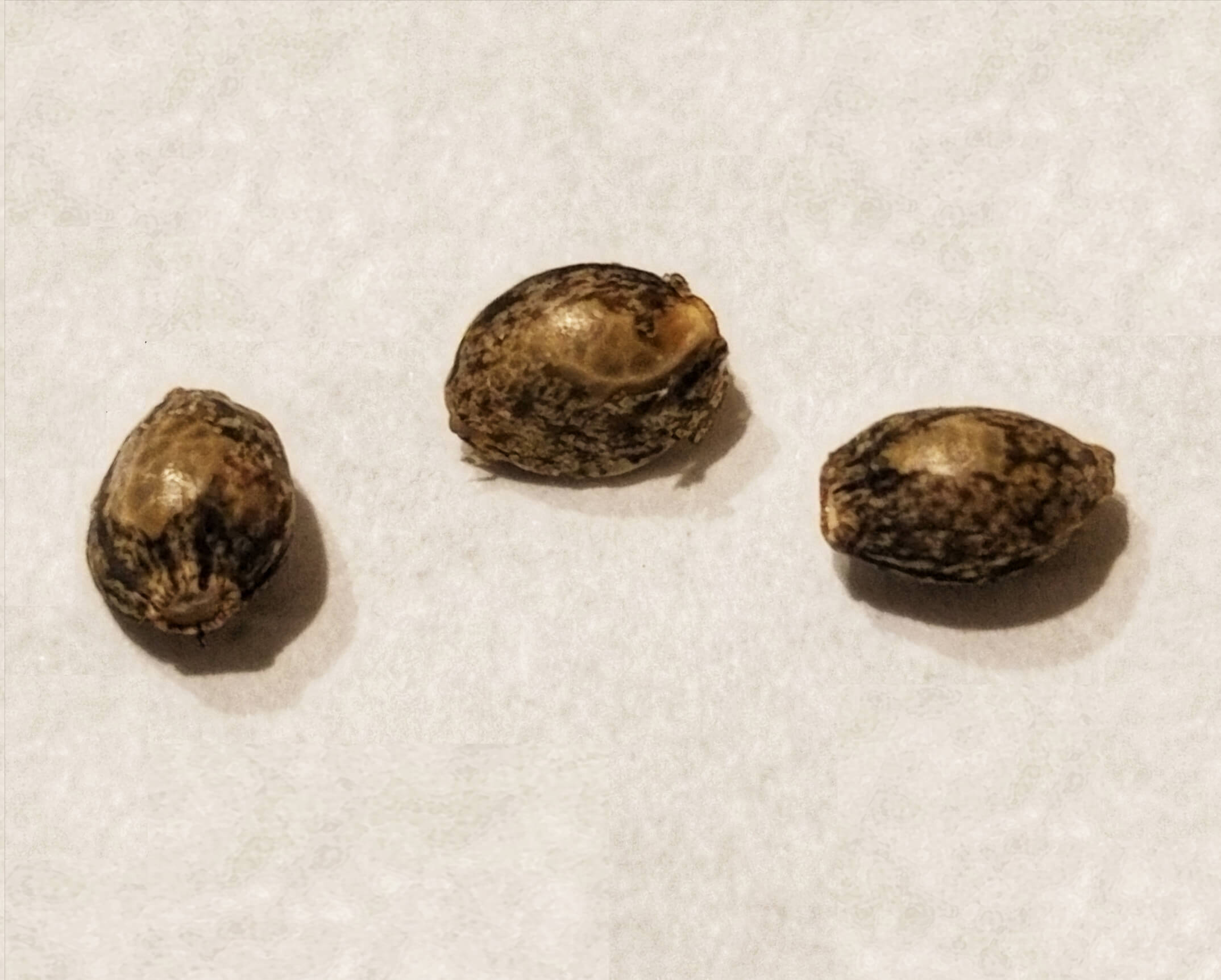 Let’s take a look where it all naturally begins for the cannabis plant. Seeds are round with a flat end and a pointed end. Immature seeds can be green or white in color while mature seeds are brown with most having some sort of degree black stripes. Mature seeds have an outer coating known as an outer casing (or hull) and if you look closely you can notice a seam that separates the two halves of the hull. When a seed is exposed to the right conditions such as access to water in darkness and with the warm temperatures, germination begins. 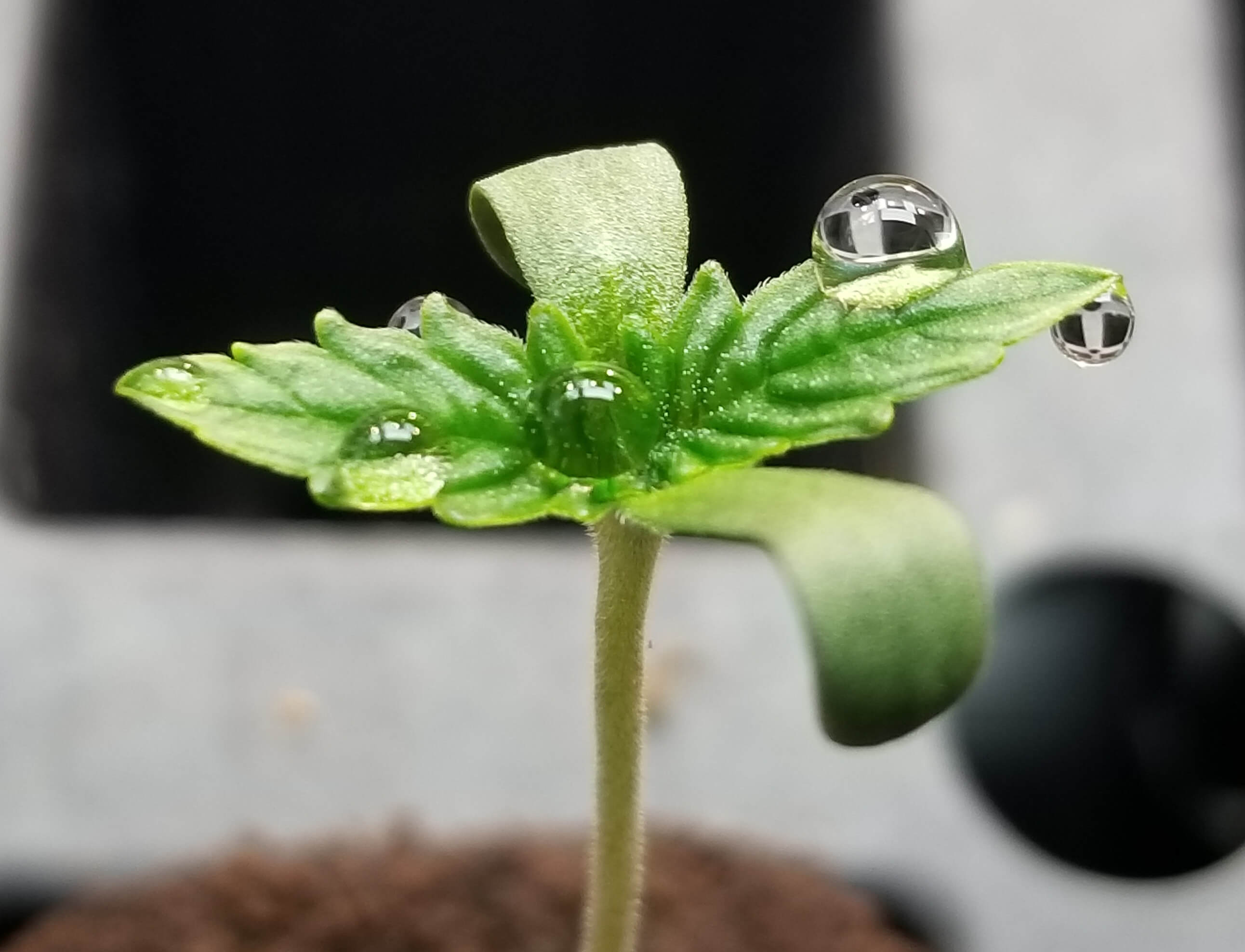 Cannabis seedling about a week after the initial germination. Notice the two cotyledon leaves which are round, then notice the first set of true cannabis leaves sprouting from the apical stem. Image by RMK.

When water and temperature conditions are adequate, the embryo bursts free from the seed cracking open the hull and eventually shedding it with the unfurling of its two cotyledons (cannabis is a dicot plant) or small round embryonic leaves which contain the seed’s food reserves required for early development. The taproot of the plant first appears from the opening of the seed hull and the root system starts to grow out looking for more water as the apical stem begins to grow upwards. As the apical stem grows vertically towards the light, the cannabis plant’s first two true leaves emerge. 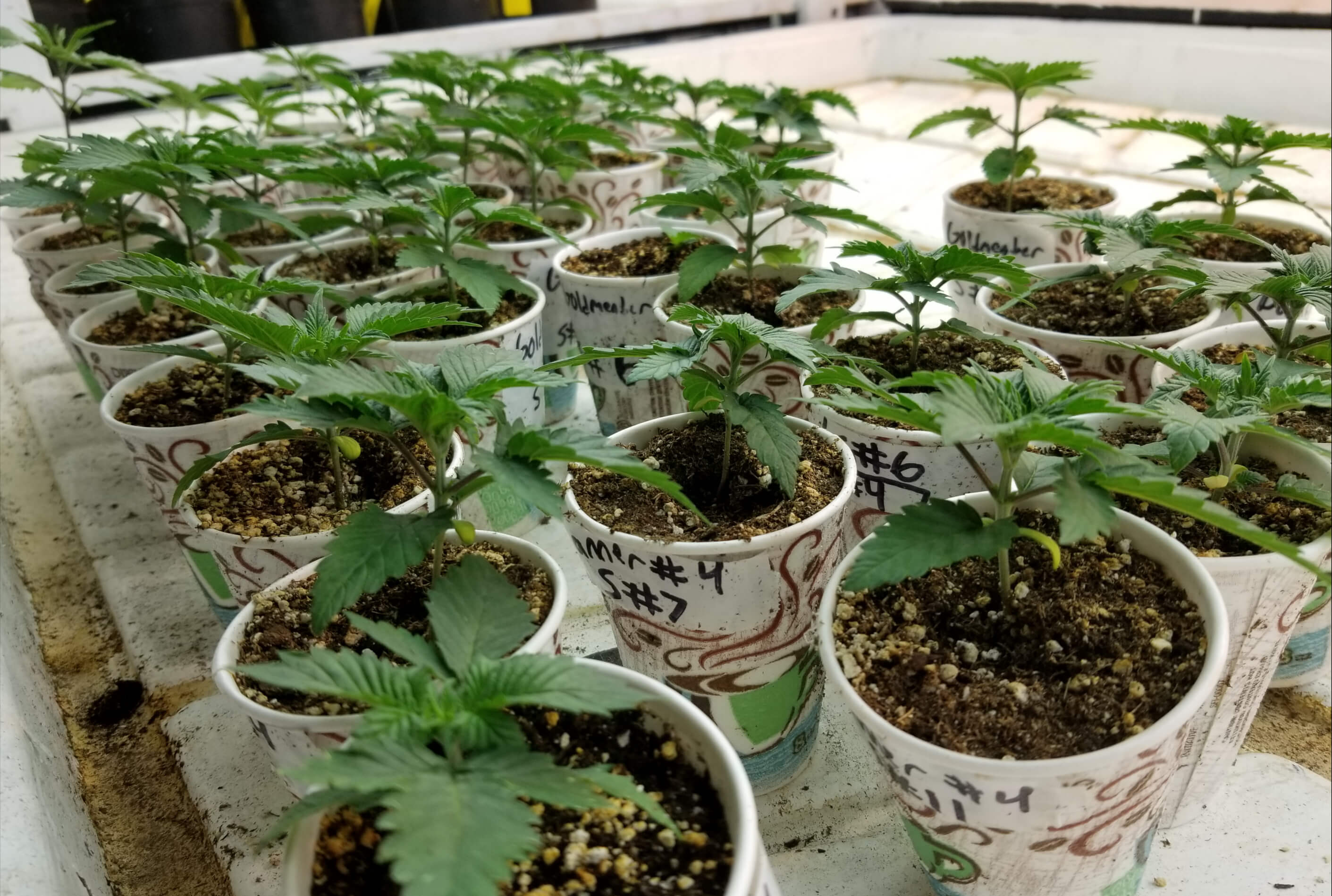 Roots can be categorized into three different types: tap roots, fibrous roots, and adventitious roots. The tap root is the main component of the root system directly attached to the stem of the plant and where fibrous roots grow out filling the medium as the tap root pushes downwards. Fibrous roots extend out, filling the substrate and provide a network for the plant to draw up water and nutrients. Adventitious roots are roots that can sprout from the stem of the plant, usually seen on cannabis clone cuttings. 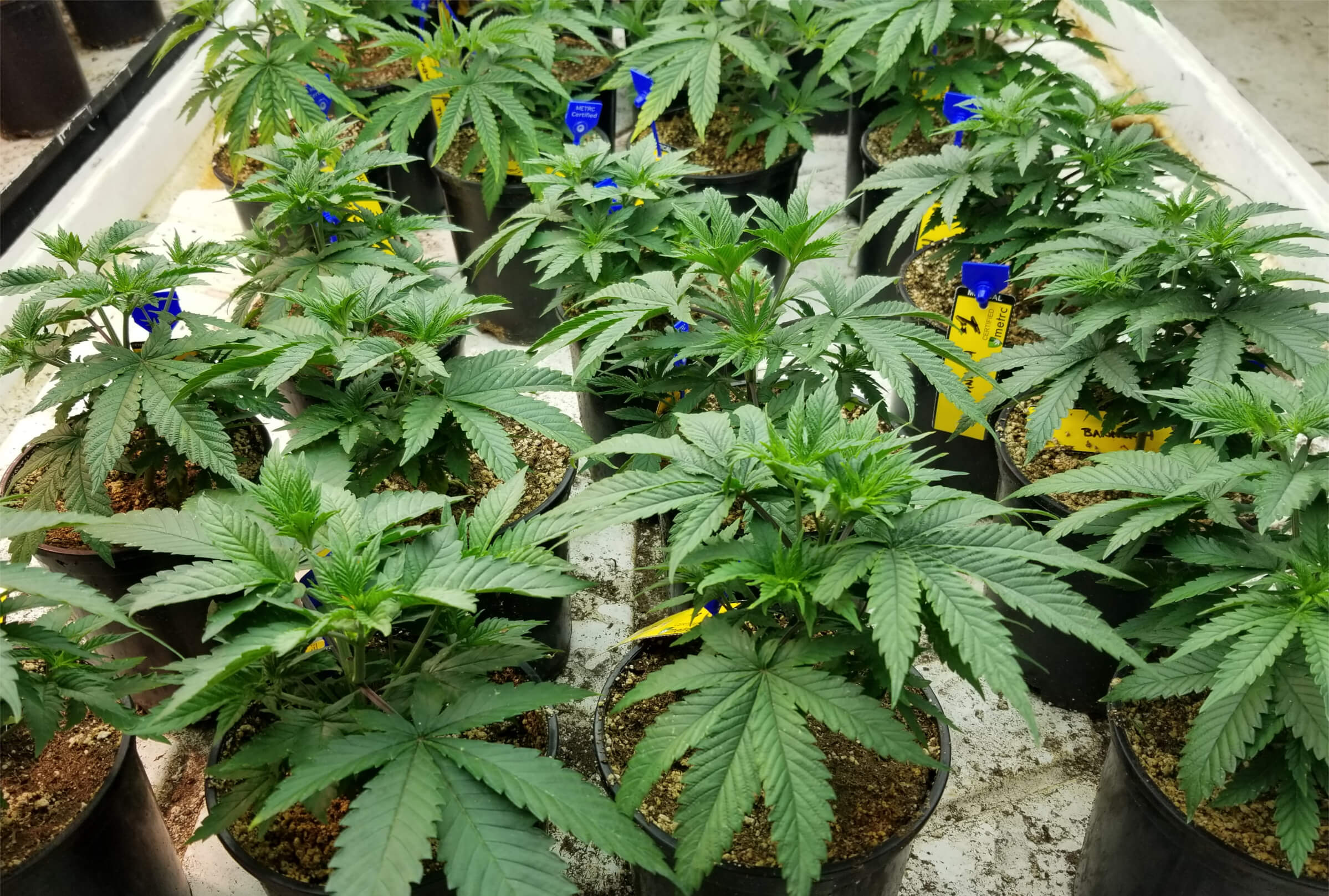 The root crown is the base where the roots protrude from the stem at the bottom. Growers will sometimes plant the root crown below the surface several inches to provide a sturdier foundation by encouraging adventitious root growth. The stem of the cannabis plant keeps the plant upright and contains the vascular system. The vascular system of the cannabis plant is responsible for carrying water and dissolved nutrients from the roots to the leaves through xylem cells. Sugars and starches are produced through photosynthesis and are stored in the plant in phloem cells. Plant leaves act as solar panels by absorbing photons of light in which the phloem transports the light energy in the plant. On the underside of the leaves are microscopic pores known as stomata that are surrounded by guard cells which control the transpiration of the plant through the opening and closing of the stomata. The leaves attach to the stem by a petiole which is a sort of leaf-stem. The petiole can vary in length, width, and color. Petioles on cannabis plants are usually different shades of green, but can sometimes be different shades of purple. Depending on circumstances, purple petioles can be a sign of either a magnesium deficiency or the plant is producing anthocyanin which are purple pigments in response to UV light emitted from certain LEDs and HID lights.

Note: Roots also act as an anchor for the plant, holding it in place and as a storage for sugars and starches produced by photosynthesis and consumed by PGPR’s (Plant Growth Promoting Rhizobacteria).

The point where lateral branches sprout from is known as nodes. The space between nodes is known as internodes. Seedlings will grow opposite pairs of nodes that are symmetrical, but as the plant matures the nodes will stagger from opposite sides. Clones cut from mature plants will also grow staggered nodes. Nodes are also where the first signs of flower appear known as preflowers. Growers can identify the sex of their cannabis plants by understanding the characteristics that make up the appearance of male and female preflowers. 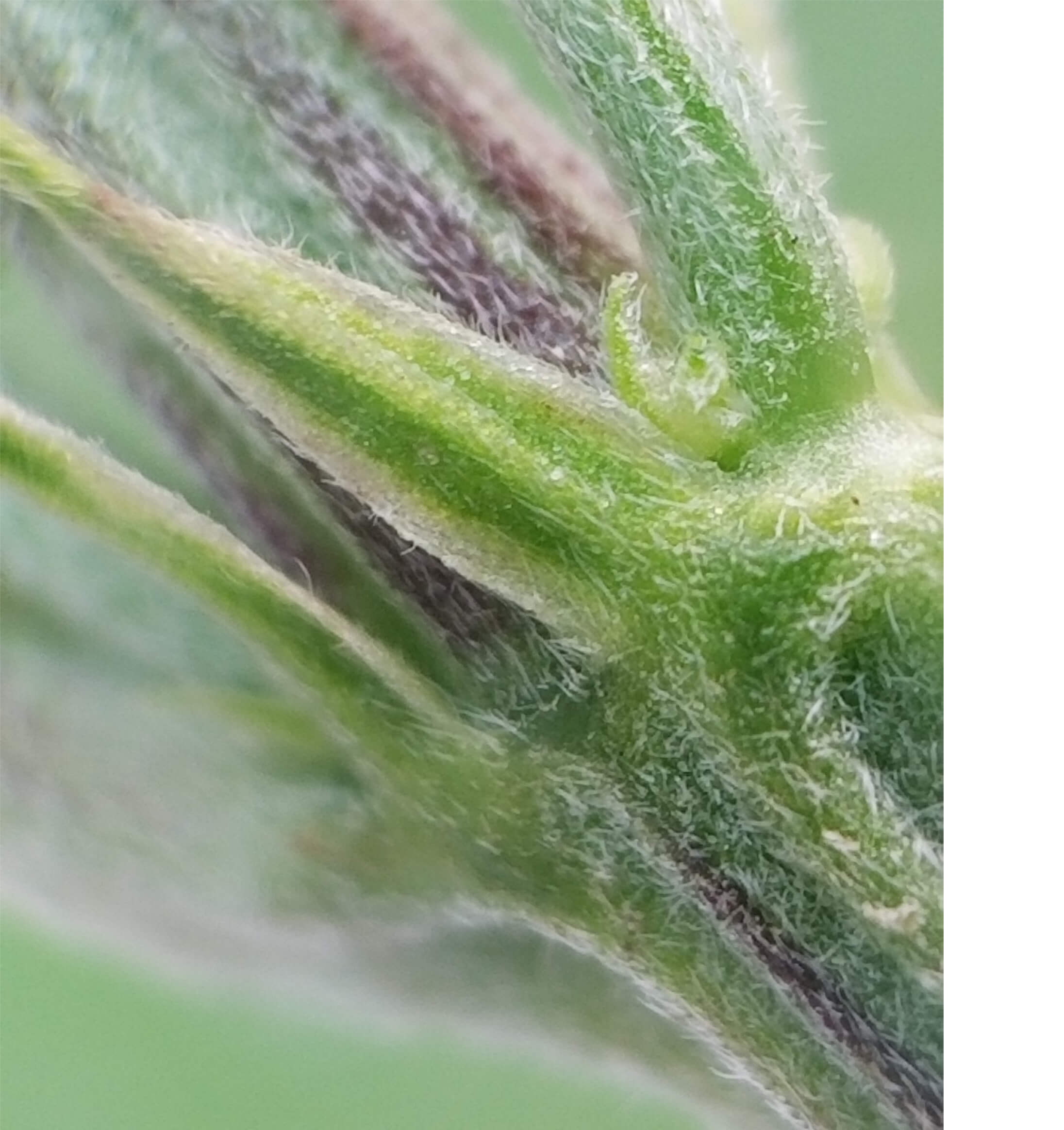 Cannabis buds are an amalgamation of leaves, bracts, and calyxes with pistils reaching outwards. Calyxes cluster up creating the bud appearance with occasional leaves sticking out between calyx and bract clusters. Tightly packed clusters of bracts and calyxes is what creates a dense bud. In general, indica strains have denser buds compared to sativa strains. If pollen reaches the pistils and calyx, then the calyx begins to form into a seed instead. The tips of the pistils are known as stigmas which are sticky on any plant in order to capture pollen. Colas are the top cluster of flower buds of each branch on the plant. Cannabis plants can have more or less colas depending on how the plant was trained in the vegetative stage. Cannabis plants can literally be covered in trichomes with large concentrations usually occurring on the female flowers or buds as well as leaves. There are several types of trichomes, but the ones that house most of the cannabinoids and terpenes are the bulbous and capitate trichomes. Bulbous trichomes are short translucent stalks with a round resinous gland on top measuring only 50 micrometers in length. Capitate trichomes comprise a majority of cannabis trichomes and can either be short or tall translucent stalks without reinous glands on top or can be taller than bulbous trichomes with a more pronounced resinous gland that is more easily visible to the naked eye at around 500 micrometers. 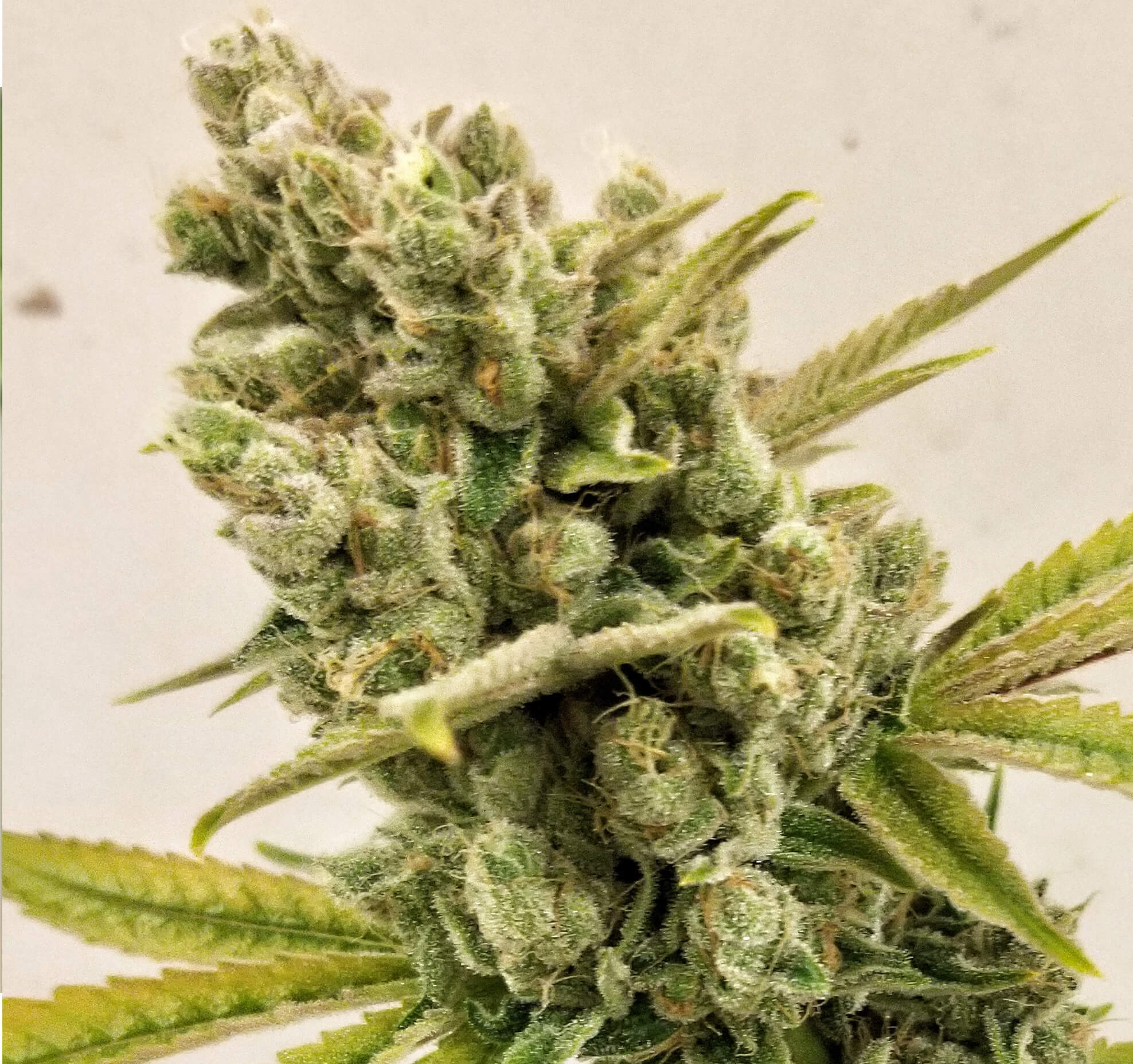 A plant clone is just a cutting taken from a mature vegetative or flowering cannabis plant. The growth of plants from seeds or clones is known as propagation. It is recommended that clones are taken from vegetative plants instead of reverting the life cycle of a cannabis plant from flowering back to vegetative growth. Since clones are genetically identical copies from the plant they were taken from, the vegetative plant should be at least two months old from seed and showing female preflowers. When taking a cutting from a cannabis plant, look for a sturdy branch that has three nodes. Cut the branch with a sharp, sterile pair of scissors just above the node on the mother plant. Shear off the lower leaves surrounding the lower nodes of the cutting and dip the stem into a cloning solution and then place into a small substrate that has been pre-soaked in a nutrient solution. A cloning solution consists of rooting hormones of various types. Clone propagation works because the end of the plant cuttings form a mass of non-specialized cells called a callus which cover a plant’s wound in the event of an injury (i.e. cutting). Unlike cannabis plants propagated from seeds, cannabis clones start with an adventitious root growing from its stem. Plant cloning doesn’t pose an ethical or moral dilemma for society because it is similar to asexual reproduction in plants which creates genetically identical offspring through mitosis or other means. For example, Onion plants create stolons which are horizontal stems that grow their own roots and develop into clones. Potato plants also create stolons which grow between tubers. Tubers serve as a nutrient reserve for new buds or “eyes” to sprout into new plants, as many as ten new plants can sprout from one tuber and one potato plant can produce as many as twenty tubers close to the surface.

Note: Clones lack a tap root, but build an extensive fibrous root system over time starting with adventitious roots growing from the stem of the clone.

Another way to create a genetically identical copy of a plant is through in vitro propagation or tissue cultures. Small plant pieces known as explants are grown using sterile agar gel mixed containing plant hormones and nutrients. It is possible to preserve a large amount of cannabis genetics using this method and to create sterile cuttings from possibly infected plants. It can be relatively expensive to begin implementing a tissue culture system for smaller cultivation facilities which is why cutting clones is the most popular method. 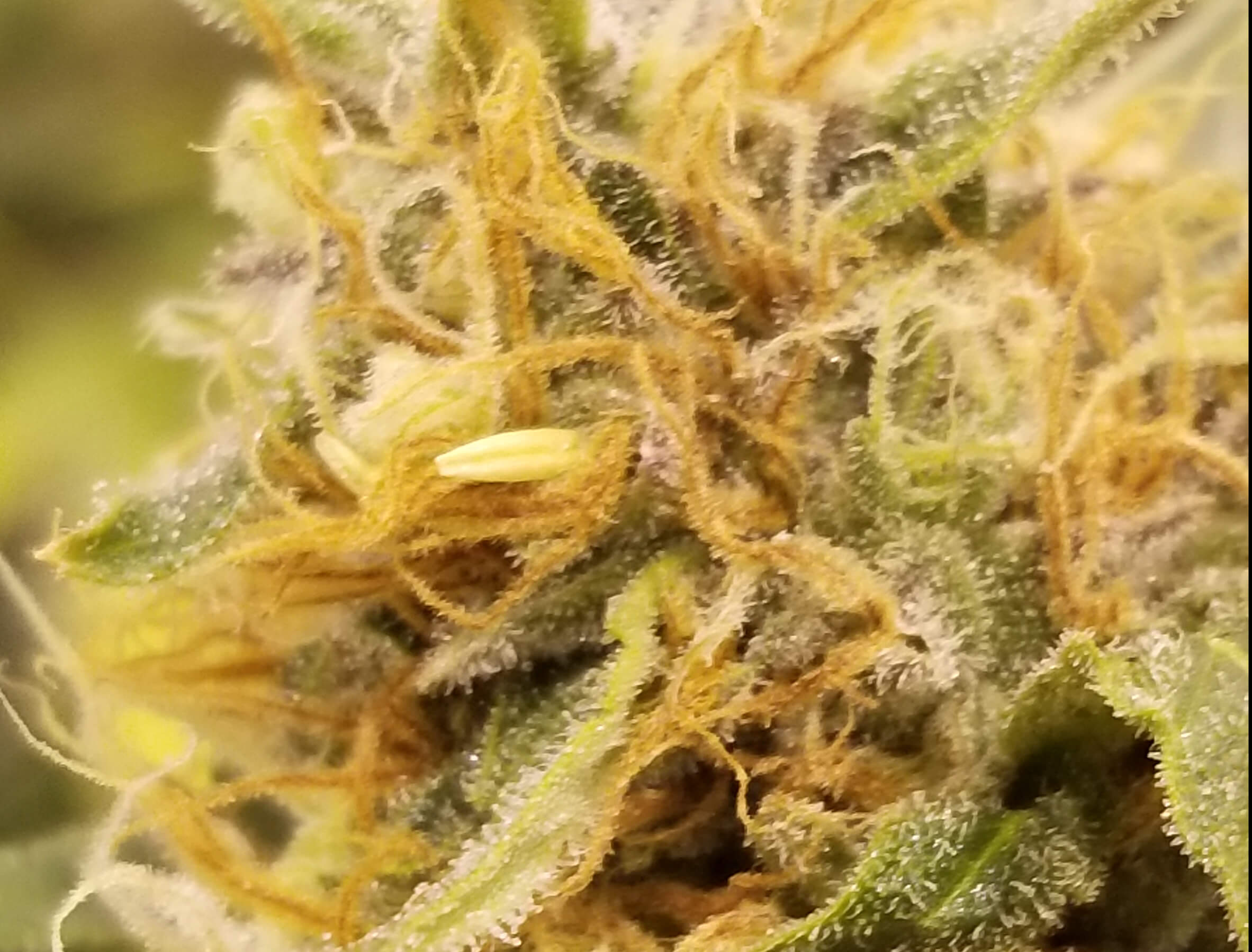 Female cannabis flower with a male stamen protruding from a calyx. This is the sign that your female cannabis plant is a hermaphrodite. Image by RMK.

Hermaphrodites in cannabis are plants that have developed both male and female flowers. These sorts of plants are undesirable in cultivation facilities where male flowers can pollinate female flowers and diminish the quality and overall yield of harvests. Hermaphroditism can be caused by either genetic or environmental factors. Plants bred using gibberellic acid (GA3) or Silver Thiosulfate Solution (STS) have a higher percentage of creating hermaphrodite offspring. GA3 or STS is generally used to create male flowers in female cannabis plants to make the genetics more vigorous and stable. Environmental stress factors can also cause cannabis plants to display hermaphrodite characteristics. One important stress factor to avoid is light stress in which the dark period is interrupted with a substantial amount of light. Other stress factors can include drought stress, waterlogging, nutrient deficiencies or toxicities, and infection or infestation. Tiny yellow male clusters will appear from a part of a cannabis bud from some of the calyxes. These tiny yellow male clusters are commonly nicknamed “bananas” for their long, slender shape and yellow appearance.