The Life Cycle of Spider Mites 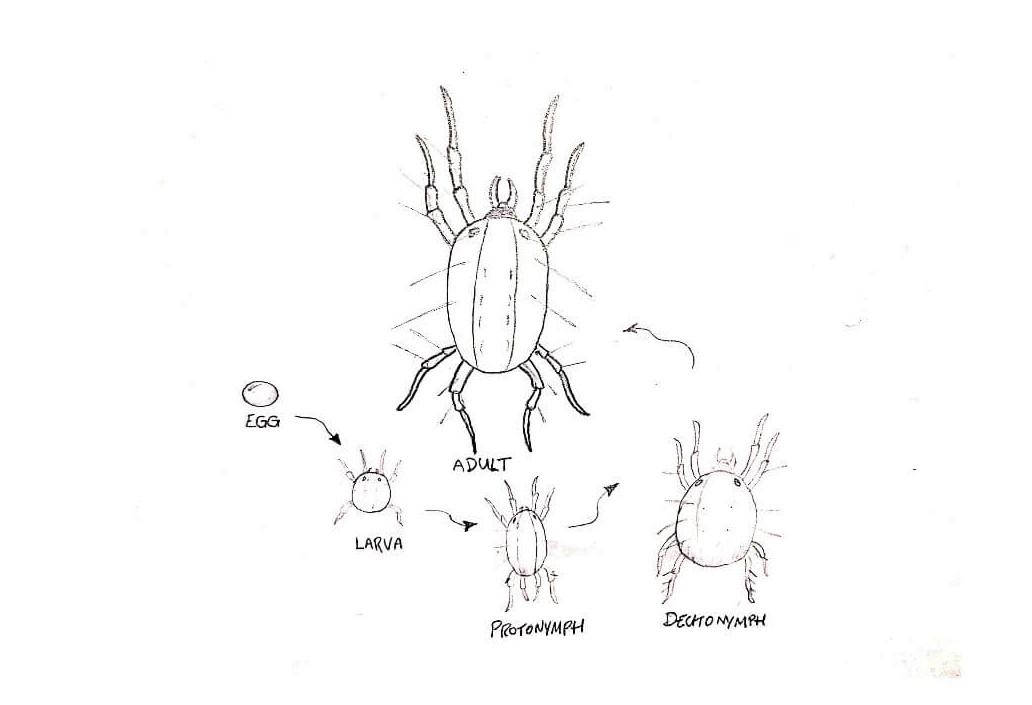 Spider mites affect a wide range of plants including Cannabis. For indoor cannabis cultivation, these are one of the most common pests to encounter. Since they can reproduce quickly in optimal conditions, it is important to take preventative measures, identify them early on, and to take measures to eradicate them.

Spider mites are technically not considered insects. They belong to the class arachnid which means they are related to spiders. Not unlike spiders, spider mites get their name from their characteristic web spinning commonly seen on foliage that they prey upon. Spider mites have mouthparts known as chelicerae and palpi. The chelicerae appear as tiny straws used to piece the surface cells (epidermal) of plants and the palpi sucks out the contents from plant cells known as mesophyll. Through this method of feeding, spider mites cause stippling damage on plants usually concentrating usually on the mid rib or larger leaf veins. There are many subspecies of spider mites including the most common and prolific Tetranychus genus which includes the Two-Spotted Spider Mite. Some subspecies of spider mites are more easily identifiable than other subspecies, but it is often considered unnecessary because spider mites share many similar traits such as biology, damage, and controls to prevent and remove them from the garden. For this blog post we will focus on Tetranychus urticae because it is by far the most important subspecies of spider mites due to its ability to affect a large number of host plants including cannabis (1). In general, Spider mites undergo four life stages in total (sometimes broken down to five stages): egg, larva, two nymph stages and then the adult stage. 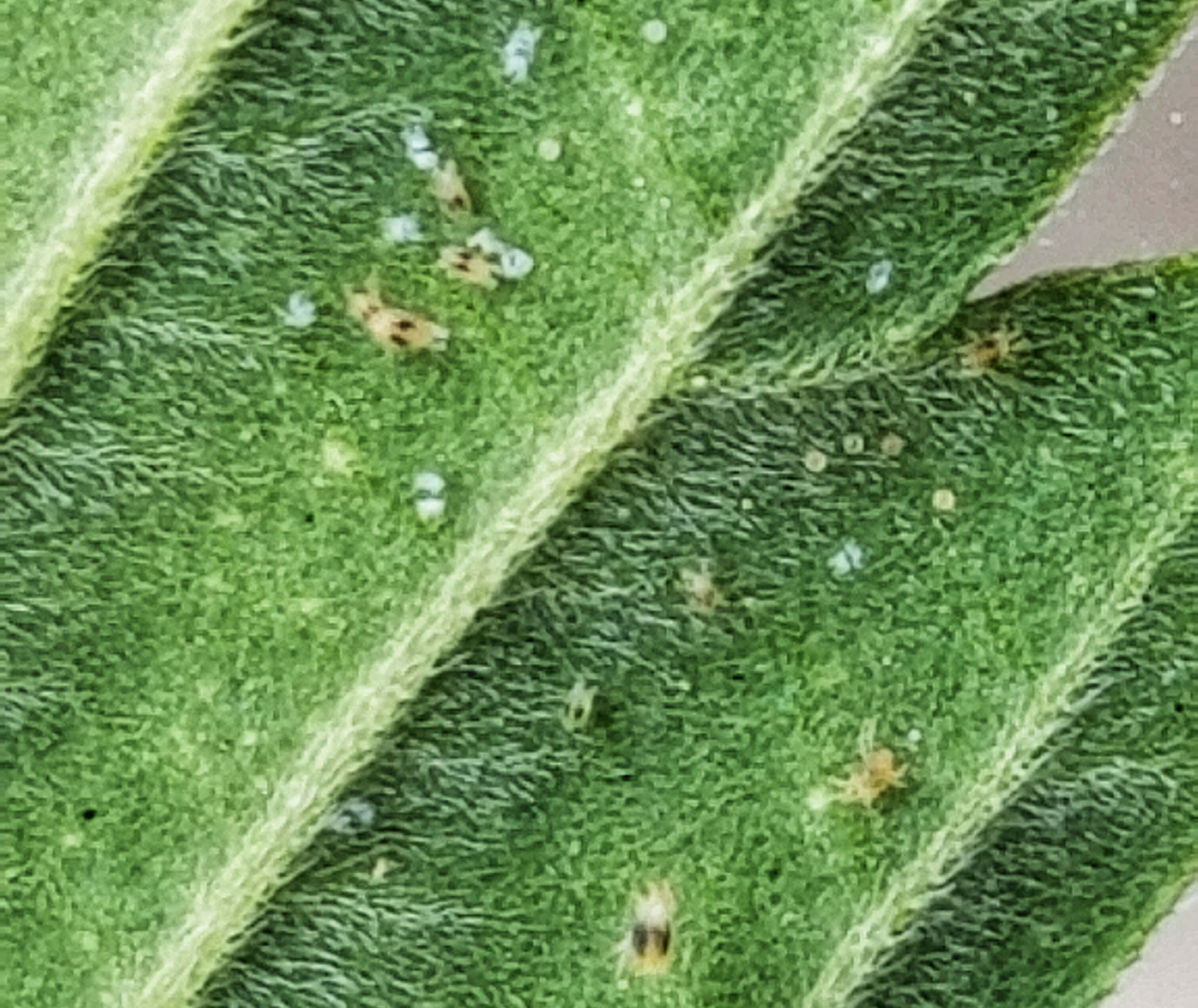 Image of Two-Spotted Spider Mites, at nearly all stages of life cycle, infesting a cannabis leaf. Image taken by RMK.

Although spider mite development can differ somewhat between species, a typical life cycle can be reconstructed. It all starts with an adult female laying fertilized or unfertilized eggs on the undersides of leaves, usually attached by a fine silk webbing that my not be noticeable to the naked eye. In spider mites, their sex is determined by fertilization. Males are developed from unfertilized eggs while females are hatched from fertilized eggs. These eggs are translucent in appearance about 1/80th of an inch in diameter and can be more easily seen with a magnifier, lens, or loupe. As they age they turn from translucent to a cream color prior to hatching.

Under optimum conditions (80F and 20% RH), spider mite eggs can hatch in three days or as late as nineteen days (50F and 20% RH) with their growth being heavily dependent on their environment. Adult female spider mites will continue to lay eggs, up to several hundreds, during her two to four week lifespan which will create overlapping generations (2). 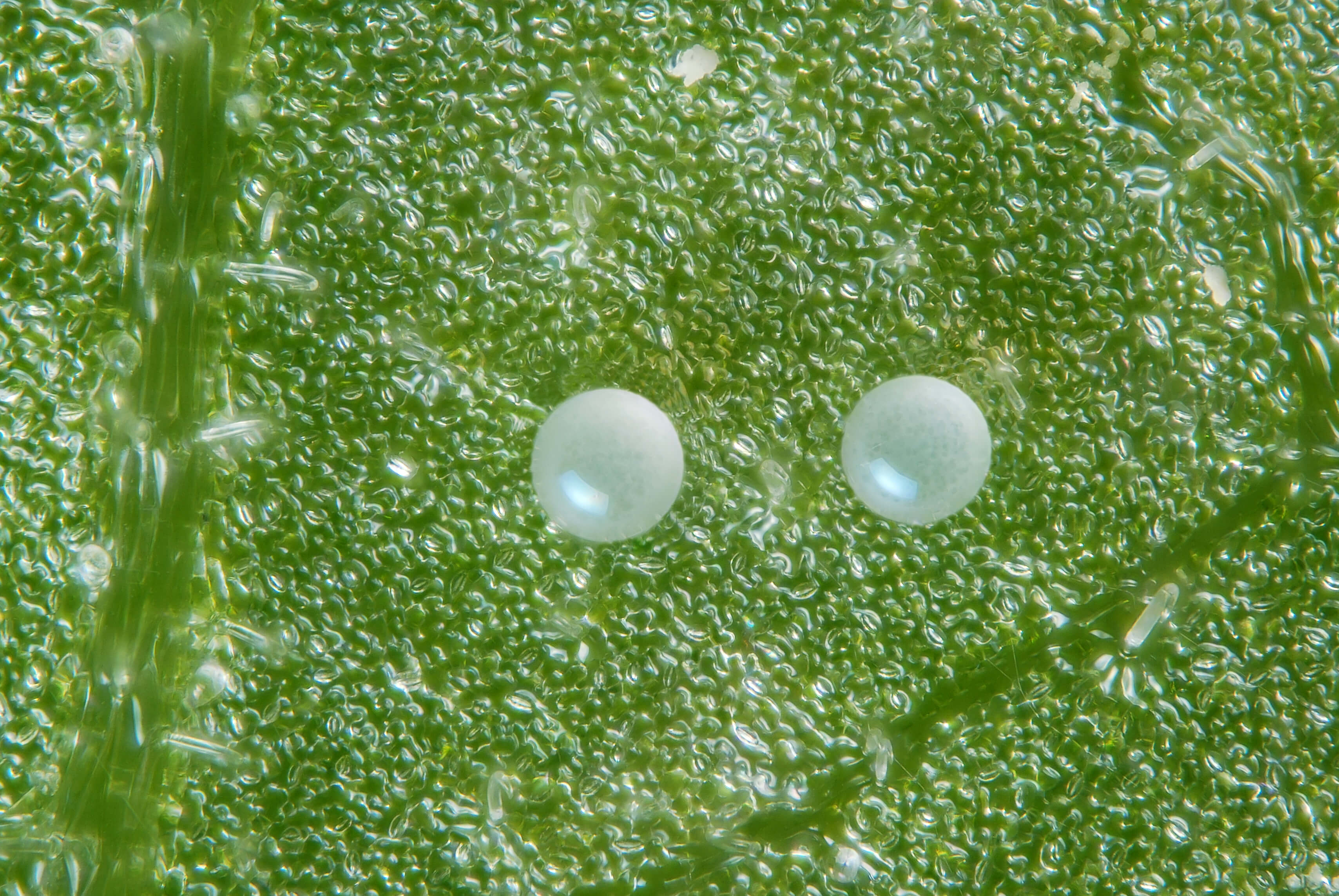 After several days from the egg being laid and in optimal conditions, a larva emerges from the now cream-colored spherical egg. The larva has only three pairs of legs or six legs in total when hatched and appears colorless. Their body appears like a smaller version of a nymph or adult, but only grows slightly larger than the egg from which it was hatched and its body is translucent. At this stage, spider mites begin to feed on plant cells, although not as much as their adult counterparts. Spider mites use their mouthparts to pierce the leaf and its cells and suck out the contents and damaging mesophyll and chloroplasts and causing stippling. The dead cells turn yellow and are usually visible on the topside of leaves as small dots commonly called stippling. After a short feeding period, there is a resting stage where the spider mites rest on the undersides of leaves and molt into their next stage of life which can last up to a few days. In this case, the larvae will become a proto nymph after its first molting. During the spider mites resting period, they are less vulnerable to pesticide applications for several reasons. This coupled with the fact that miticides used in cannabis production are not effective ovicides, means that repeat pesticide applications (approximately 3-5, days apart) will be required to effectively kill a spider mite infestation (3). 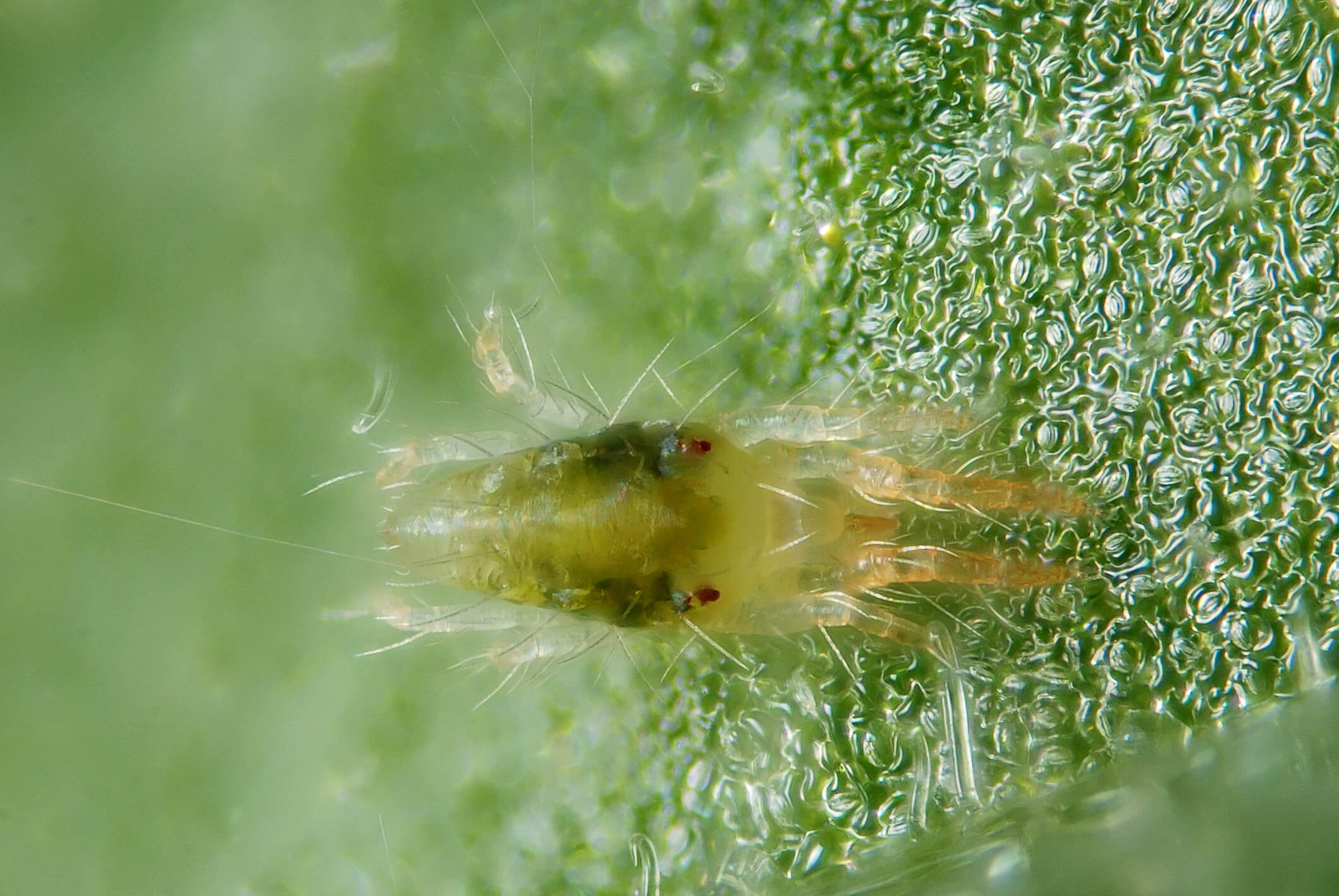 As spider mites transition from larvae to nymphs, they grow an additional pair of legs and begin to produce webs. The nymph stage is broken down into two phases: the protonymph and the deutonymph. At this stage, the spider mite is still sexually immature, unable to reproduce until its adult phase. The nymph appears similar to the adult, but not as large. Their color is white with two visibly greenish spots that are characteristic of the two spotted spider mite, revealing part of their insides, with their head, thorax and abdomen appearing to be fused together to make up its round and compact body shape (4). After another episode of feeding, the spider mite goes to molt on the underside of the leaf, going from a protonymph to a deutonymph, to start the process of feeding over again until it is ready to molt as a deutonymph changing into an adult. The process of passing through the two nymphal stages (protonymph and deutonymph) can happen in as few as 5 days (5). 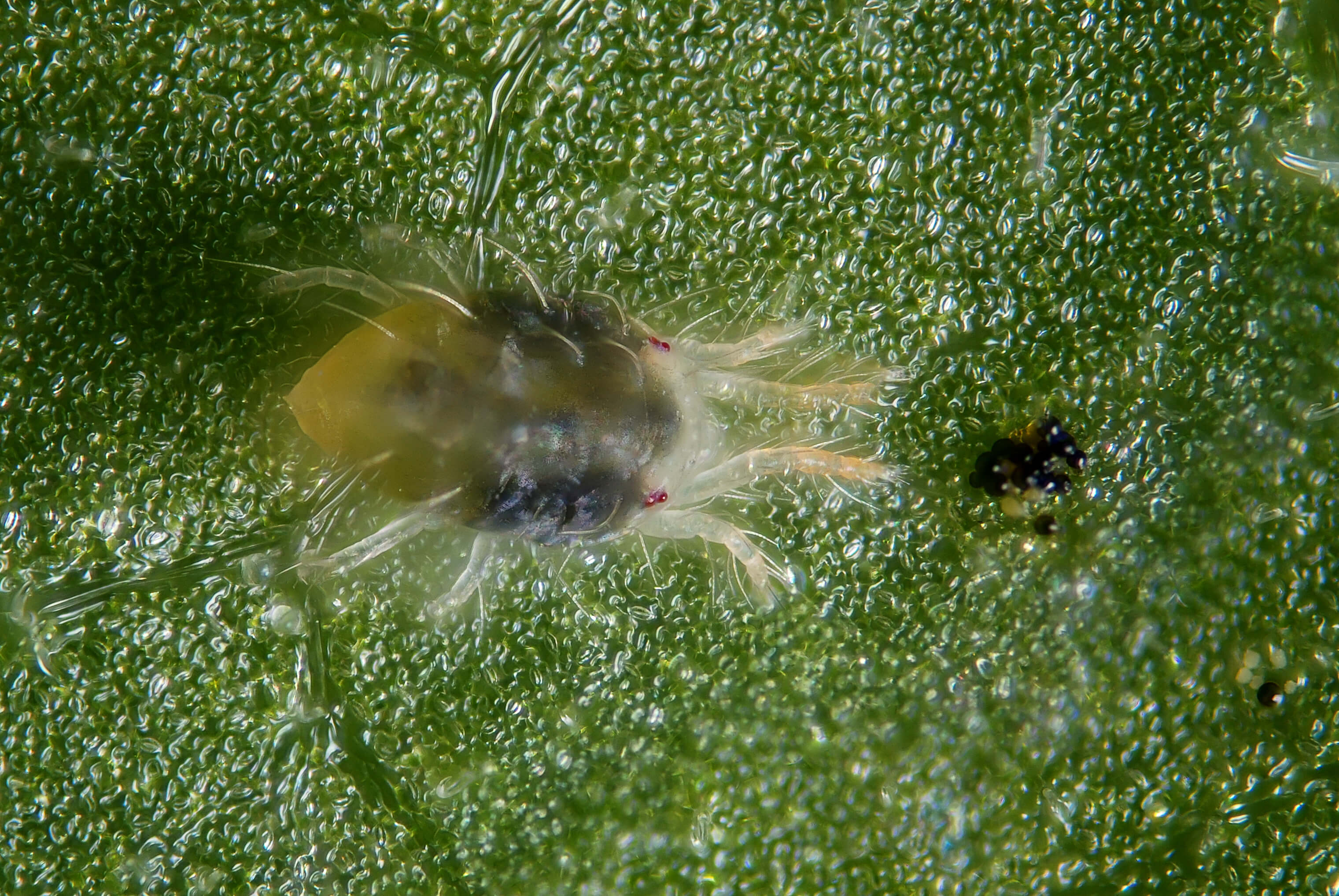 After molting for the second time as a nymph, spider mites, are now adults and are approximately 1/50th of an inch long. Adults can still appear translucent or white in indoor conditions, but in outdoor conditions they may appear orange-red or even brown if overwintering. The adult females have a more round body with 12 pairs of dorsal setae which are appear as tiny stiff hairs used as sensory organs. The adult males are slightly smaller than their female counterparts and have a more elliptical body. Over their lifespan, spider mites may get darker spots as they accumulate body wastes. As soon as adult spider mites emerge from their last molting, they are sexually active and will lay eggs only a few days later (6). Each female may lay over 100 eggs throughout her adult life at a ratio of approximately 19 eggs per day and mating is not required (7). A generation from egg to adult can occur in as short as 5 days or as long as 20 days. As they begin to colonize on a plant, they will start to look for other host plants in their vicinity and may produce excessive webbing on the tops of colas when cannabis plants are in late flower which can collect dust. Spider mites can easily travel on one’s clothing or shoes to get to another host plant. 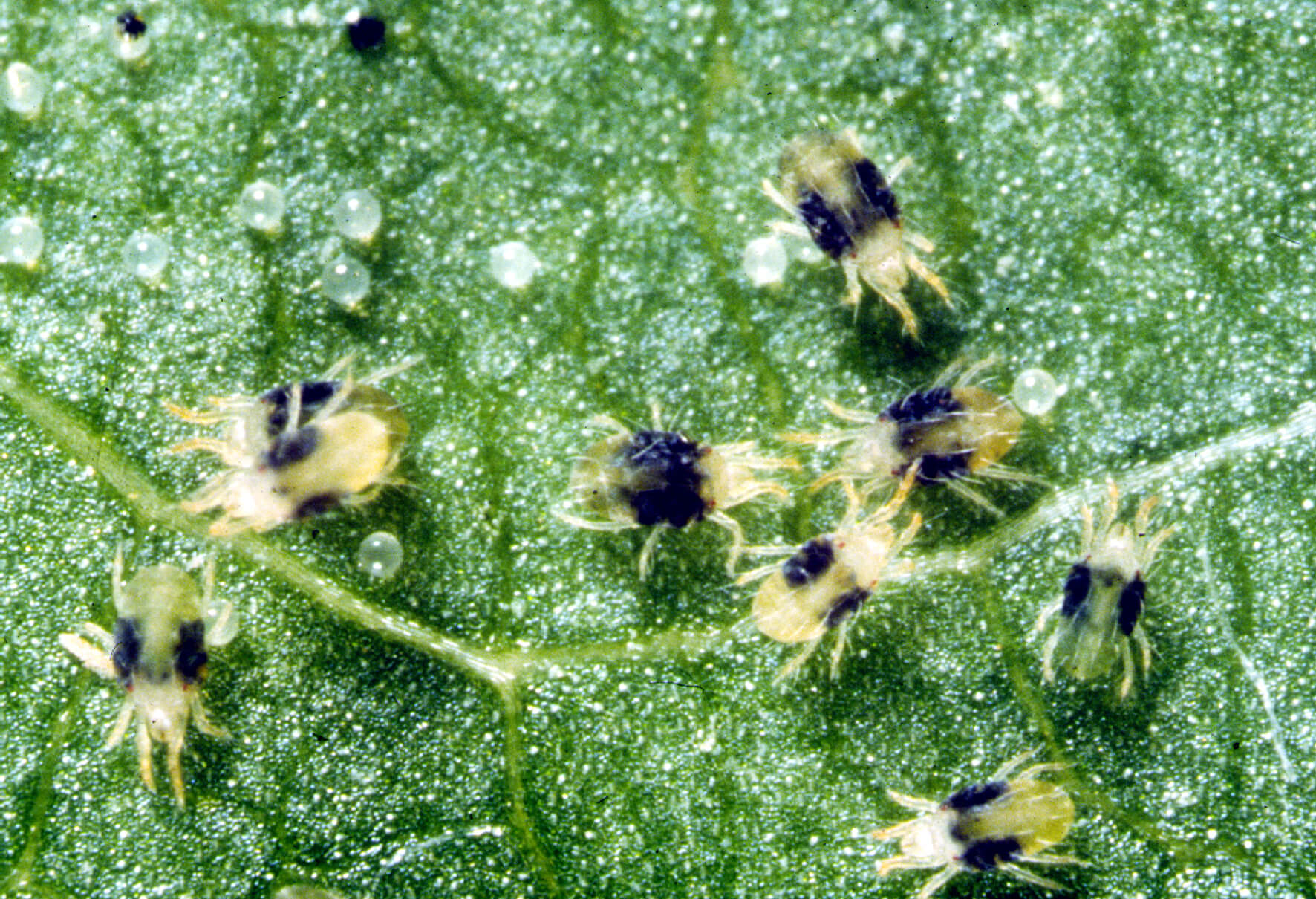 Biological or chemical controls can be effectively used to counter any grower’s spider mite problem. Spider mites tend to colonize and heavily infest one host plant before moving on to other host plants. As plants are damaged, spider mites start to migrate away from the plant and spin protective webs over plant surfaces for various reasons. Spider mites can move from plant to plant on an individual’s clothes, shoes, or even using strands of webbing to passively glide in the wind. If you are going to introduce biological controls to the growhouse such as predatory mites, then you may want to bring them into the garden before the infestation gets out of hand. You can set up some packaged containers within a grow room filled with beneficial insects and provide an adequate environment to allow pest predators to thrive. Some common spider mite predators include: Phytoseiulus persimilis, Neoseiulus californicus, Amblyseius andersoni, Amblyseius fallacis, Mesoseiulus longipes, Galendromus occidentalis, Feltiella acarisuga, Stethorus punctillum, Assassin bugs, and minute pirate bugs. When using predatory mites, it may be difficult to distinguish between spider mites and predatory mites. A possible method of detection is to take an infected leaf sample and in a rapid motion strike the leaf onto a piece of paper. Crush the mite on the piece of paper in a streaking motion with one of your fingers to better identify between pest and predator mite. Spider mites will produce green streaks, while predatory mites will streak yellow or orange. Different predator bugs will work better under different conditions so it is important to check into predatory bugs before purchasing. Also, keep in mind that when you are using predatory mites and other predatory insects that you won’t be able to use chemical controls (i.e. spray). When trying to detect spider mites you are more likely to notice the damage they cause to plants known as stippling before you notice live spider mites because the damage can be seen on the topside of leaves and spider mites live on the undersides of leaves. A hand lens may be helpful in order to get a closer look at the tiny creatures, but is not necessary. Since they can develop from egg to adult in as few as 7 days in 81F and about 20 days in 64F, you can set a timeline for how often and how long plants will be sprayed in order to make sure all spider mites were treated depending on your own environmental conditions. If you decide to use chemical controls it is important to note that miticides approved for use on cannabis on a state level, are not very effective on spider mite eggs. Two or more spray applications will be required of 3 to 5 days apart in order to effectively kill the spider mite population (11). Chemical controls that are commonly accepted for use on cannabis at the state level include insecticidal soap and many plant-based oils, just make sure you are checking for approved products on the pesticide list from your state’s Department of Agriculture when looking for a product to use. Some examples of accepted pesticide main ingredients include potassium salts of fatty acids, pyrethrins, azadirachtin, rosemary oil, and cinnamon oil. It is also best not to spray plants that are already stressed from other factors such as water stress, environmental stress, or nutrient stress (12).

The two-spotted spider mite is one of the most invasive pests under indoor conditions. They feed on plant cells, diminishing chlorophyll and causing stippling. The duration of a spider mite’s life cycle varies greatly depending on environmental conditions with temperature being the chief contributor to that variability. A generation can be completed in under a week if conditions are favorable. Both biological and chemical controls are popular and effective methods to mitigate spider mite issues.