The use of cannabis for both medicinal and recreational purposes dates back thousands of years in various regions of the world. It is perceived as a relatively harmless drug when compared to the two most popular and legal drugs: alcohol and cigarettes. It is estimated by the National Institutes of Health (NIH) that approximately 88,000 people die from alcohol and alcohol-related causes every year, while cigarettes cause 480,000 deaths annually. This makes alcohol the third leading preventable cause of death in the United States behind tobacco use and poor lifestyle (2). The National Center for Biotechnology Information, an affiliated branch of the NIH has stated that there are no known cases of fatal overdose from cannabis. Since there is enough data to determine that billions of cannabis products are used every year, if there was even a risk of death of one-in-one-million. It would equate to a few thousand overdose deaths every year, but it this is not the case (5).

Can secondhand cannabis smoke get you stoned?

There was a study published in May 2015 by Johns Hopkins University School of Medicine and it was published in the journal Drug and Alcohol Dependence (1). The study conducted included seven individuals ages 18 - 45 who were regular users (smoking twice or more a week) and tested positive for THC in their system. Twelve non smoking individuals who tested negative for THC in their system were also recruited to test the effects of secondhand cannabis smoke. Six smokers and six nonsmokers were placed in a small 10ft by 13ft room for one hour with ventilation turned off. The smokers were given 10 cannabis joints each to smoke within the time frame. In another instance the same scenario was played out, but with the room’s ventilation system turned on. At the end of the one hour session, nonsmokers were tested for THC through their blood, urine, saliva, and hair. All six of the nonsmokers who had spent one hour in the unventilated room had detectable amounts of THC in their blood and urine samples. The THC in the blood was observed for up to four hours after the exposure. The six nonsmokers that had spent the hour in the ventilated room did not test positive or have any detectable trace of THC in their system (1). This means that under ‘extreme’ conditions or in an unventilated, and enclosed space where plenty of cannabis is being consumed or burned (60 joints smoked by 6 individuals in a small room), an individual may feel a contact high or buzz from the secondhand smoke and they may test positive for THC hours after exposure, but the THC concentrations fade in less than one day. 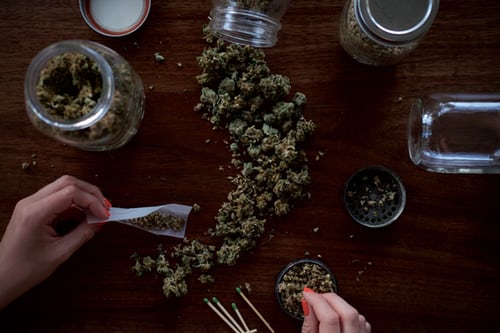 Packing a grinder and rolling a joint.

A study published in the British Journal of Anesthesia in 1999 by C.H. Ashton from the University of Newcastle studied the ability of the lungs to absorb THC from inhaled cannabis smoke. Researchers determined that up to half of the THC from joints make it into the human body. Secondhand smoke will have less THC and the ability for the lungs to absorb THC from secondhand smoke is much lower than directly inhaling from a joint. This means that an individual would have to be inhaling more than secondhand cannabis smoke in a ventilated room in order to become impaired or fail a drug test (3).

Researchers from the Institute of Legal Medicine in Germany studied the effects of secondhand cannabis smoke in coffee shops in Maastricht, Netherlands in 2010. Blood and urine samples were taken from eight volunteers who were exposed to cannabis smoke for three hours in a popular Netherlands coffee shop. After up to three and a half hours after exposure, the volunteers tested positive for THC, but in such small concentrations that it would not cause a failed drug screening (4). After six hours from cannabis smoke exposure in the coffee shop, volunteers had no trace of THC in their system from secondhand exposure.

There is a wealth of information and research which covers the adverse health effects of secondhand cigarette smoke exposure, but there is much less research covering the topic of secondhand cannabis smoke exposure. The evidence that does exist on the subject seems to demonstrate that cannabis smoke is less carcinogenic than cigarette smoke and that the likelihood an individual will become stoned and fail a drug test is unlikely. As long as you keep away from unventilated rooms where lots of cannabis is being smoked, then you do not have to worry about having it enter your system. At the very least cannabis consumers should be respectful of the individuals in their surroundings who do not smoke cannabis and understand when it is best to spark it up.