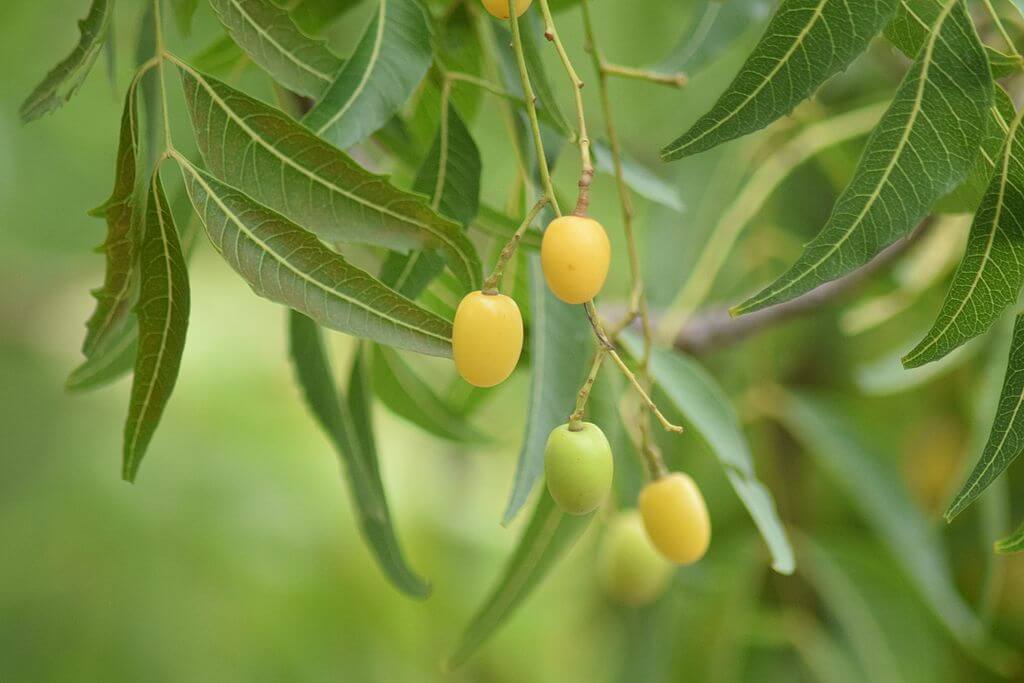 Image of a neem tree with fruits (2).

What is Neem Oil?

Neem oil is a vegetable oil with known insecticidal properties that is found in the Neem Tree (also known as Azadirachta indica) natively located in India and Southeast Asia (4). The oil is commonly harvested from the fruits and seeds of the neem tree and can be yellow to brown in appearance. The aroma is strong and often compared to garlic. There is a long history of neem oil use for pest control on a wide variety of plants and there are even components of neem oil that can be found in several different household products such as soaps and cosmetics. Neem oil can be considered an organic pesticide and can be used with minimal harm to beneficial insects. Neem oil is made up of several components, one of which is very important for repelling and killing pests. This important insecticidal component found in neem oil is known as Azadirachtin. Azadirachtin is commonly extracted from the neem oil which leaves a hydrophobic neem oil product leftover. 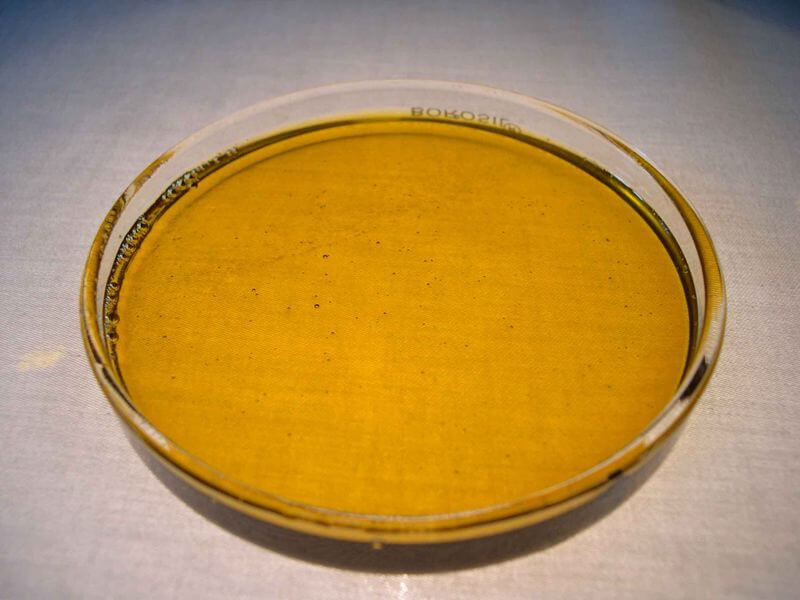 Neem oil can be found in granule, dust, wettable powder or emulsifiable concentrates for pesticides. Some common neem oil pesticides that are approved for cannabis cultivation include:

are almost all allowed for commercial use (besides Garden Safe Brand) in the state of Colorado (5). 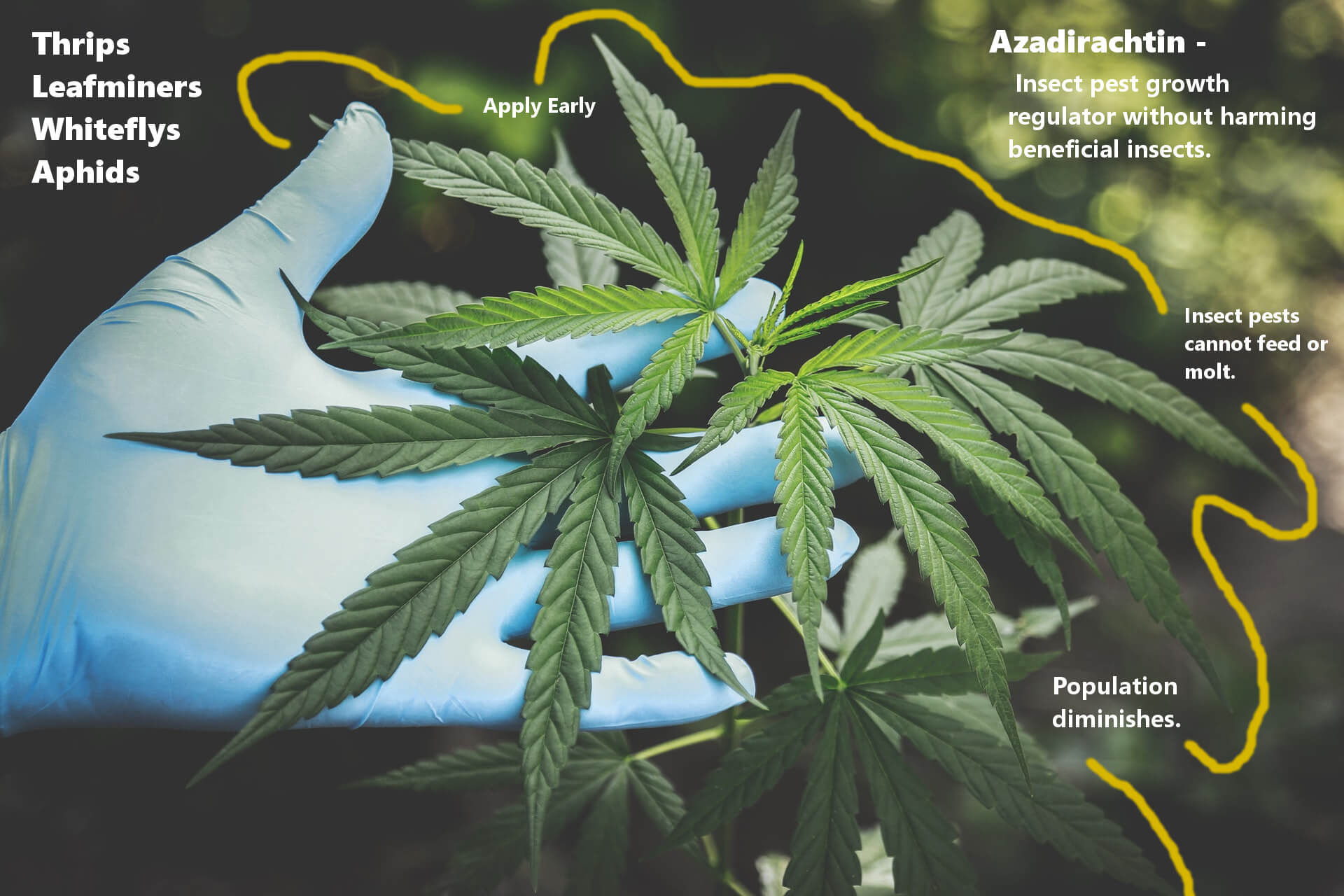 Neem oil and its derivative pesticide products are used on several different crops and ornamental plants for effective insect pest control while leaving most beneficial insects behind. Since neem oil can be used on a variety of crops and plants, many individuals can be exposed to neem oil in their diet (3). Neem oil is mildly irritating to the eyes and skin while azadirachtin can be extremely irritating to the skin and stomach. Neem oil is practically non-toxic to mammals, birds, plants, and most beneficial insects (including bees). It can be moderately toxic to fish and other aquatic organisms and so can azadirachtin which is why it is important to prevent it from contaminating a water source such as pouring it a mixture down a drain. The half-life of azadirachtin in soil can range widely from 3 - 44 days, while the half-life in water has a much lower range of 1 - 4 days. It breaks down on plant leaves relatively quick with a half-life of only 1 - 3 days (6). Microbes and light usually break down the pesticide over time. You can minimize exposure to neem and azadirachtin by wearing a full facepiece respirator, gloves, protective shoes, long plants, and long-sleeved shirt.

How Neem & Azadirachtin are Effective

Neem oil acts as an insect growth regulator that affects insects. It disrupts the natural development for insect pests by preventing normal hormone releases which are important for growth. Neem can be used to effectively kill soft-bodied insect pests such as aphids, whiteflies, and thrips once its ingested which can be possible through contact. Spray applications of neem oil or azadirachtin based products used prior to releasing beneficial insects can be an effective method of keeping insect pest populations at a minimum indoors. Neem oil can also be used to drench the substrate to get rid of unwanted insect pests that may live near the roots at some point in their life. When spraying neem oil or using it as a root drench, it is recommended to mix in a surfactant such as Coco-wet, SM-90, or Therm X-70 which will increase spray coverage over a plant. I have used each of these effectively in combination with several different neem based pesticides in order to kill insect pests. Neem oil is an effective chemical control option that has minimal impact on beneficial insects and the environment. Spray plants or drench roots with azadirachtin in 7 - 14 day intervals while ensuring your spray coverage is thorough (8).

There has been some false and unsubstantiated claims about neem and azadirachtin poisoning causing Cannabinoid Hyperemesis Syndrome (CHS) which is a condition that leads to severe bouts of vomiting relieved by hot showers and stopping cannabis consumption. CHS is rare and only occurs in daily long-term users of cannabis. The underlying cause is still unknown. It is true that neem poisoning does have nausea as a symptom, but that is generally where the similarities stop. This is because neem poisoning also includes severe salivation, diarrhea, possible liver toxicity and convulsions (7). These other symptoms do not match the symptoms of CHS and neem poisoning cannot be treated with hot showers as is commonly reported for CHS patients.